What was your first crash in?

What was your first crash in?

What was your first crash in? (Sorry Bub) Well mine was in my mum’s metallic bronze chevette. Right up the arse of a white mini clubman that slammed on for no reason. Unfortunately for him it was witnessed and it went 50/50.
Just when I thought I was out they dragged me back in.
Top

I managed to get through the tiny gap between the oncoming bus & the parked car, the fella that was trying to race me hit my rear offside quarter and the nearside front of the bus, utterly wrecking his Mk 2 Escort. Actually, it turned out to be his bird's. Bet she wasn't pleased.

Crashed my Suzuki X1-50 moped at 16 straight into the towbar on a Cortina, was going down to get my GCSE results, pushed it to a friend house and rang my parents to get me.

Reversed my Fiesta Supersport down the drive at 17 a couple of months after passing my test, passenger door want property shut and it swung open putting a nasty crease in it.

Aged 20 something I spun my diesel cavalier on black ice after pulling out to overtake resulting in me going backwards at about 40 ish mph, somehow got it back around and carried on to where I could stop until I finished shaking.

Aged 25 black ice again in a range rover clipped s stone wall with the rear bumper.
Same range rover a year later, jumped in with a migraine stuck it in reverse and went straight onto the bonnet of some twat parked behind. I don't drive with a headache any more.
Top

God I forget my first ever was actually on an MT5 Honda squeeler. Head on into a mini, they had no lights on and were going the wrong way down a one way at night whilst it was raining. That hurt a lot, smashed my right knee, left elbow and flattened my nose due to wearing a pisspot.

Just when I thought I was out they dragged me back in.
Top

I was fairly lucky on mopeds and never hit anything but did clip a curb on my NSU Quickly and fell off. I still have the scar from the legshield. First car crash was when I went into the back of a brand new mk2 Fiesta in my Datsun 100a. I had a few prangs in that old thing including rear ending a Merc in Harlow. The guy got out and said not to worry about it and drove off. I finally killed it one night coming home from Southend when I failed to make a corner and took off through a hedge and into a field. It did drive home but the subframe was bent and all the filler had fallen out of it.
1957 Panhard Dyna Z12
1965 Ford Thunderbird
1974 NSU RO80 (fucked)
1999 Peugeot 806
2011 Toyota Auris
Top

Mine was a bit inauspicious as it was actually the first time I had driven anything.....

Schoolmate (we were 12 and 13) had been given an Anglia van by his big brother. He used to just potter up and down the driveway in it - probably no more than 5 or 6 car lengths - and then reverse park it in the turning circle on the front garden (Mater and Pater were a bit posh - they had a breakfast room FFS).

He asked me one evening if I would like a go but only if I knew how to drive. Well I did know how but hadn't actually ever done it.....

The first couple of feet were very good, I didn't stall it, backed it up to the front gate and proceeded to start my full "length". Somehow, I got carried away and virtually floored the thing. It ran away like the Cannonball Express, smashed over the back door step, flattened his Mum's little tin milk crate but worst of all clattered straight into the back of Pater's P5 Rover. The six foot width of Solihull's finest rear bumper was more than a match for the Anglebox front tinware and even though by this time I had found the brake pedal the Anglia had impaled itself on both over-riders.....

Needless to say Mother came flying out the back door - it must have sounded like Harringay Stadium indoors and she appeared at my side window waving this little milk crate with a bent handle pointing to an impossible number of Pints Please for a three-person household. I was more concerned about the Rover but it was largely unscathed - not so the Anglia whose history of Isopon repairs were now only too evident. The rad had been holed by the AA badge on the grille and there was a very bent front rim and knackered tyre.

We straightened it all out, including the milk crate, polished the P5 bumper (luckily the old man had gone bowling with a chum) and caught the bus the following Saturday to the road by the scrapyard for a replacement wheel - I remember the bastard bus driver not letting us on with it and we had to walk back, taking it in turns to wheel it home. A dog turd in the rad sorted that out enough for future driveway GP but I never forgot the horror of that out-of-control sensation!
Born to rock and roll.
And drive shit old cars.
Top

Scraping the pegs on my Honda CB125S around a gravel covered bend equalled slide down road.
I was changing a cassette in the stereo when I planted my Hilman Imp van into the back of a Datsun 120Y that had stopped because of the traffic queue at the Black Cat roundabout on the A1.
My insurance paid for the repairs to the Datsun but being third party fire and theft I was round the scrap yards collecting a bonnet from here (Mum driving), a bumper from there (works van), wheel and tyre (bus) and eventually hand sawed a front panel off a scrapper and rode my Honda CB125S back with the front panel strapped to me.
Got a mate to weld the panel in and brush painted the thing back to one colour.

1at Crash for me after 25 years of driving was My Late Dads 2014 Fiat Panda...Got T Boned by a Hyundai i10...both were written off
Next thing you know ..Jeds a millionaire!
Top

First crash driving an Anglia van aged 6.......proud dad as getting me to demo my skills to grand parents by letting me drive around cornfield next to his garage. I wasn't up to the pressure and hit the fence......

I had a couple of minor scrapes over the next few years but worst was reversing my A55 van along the side of a metallic gold Sunbeam Stilleto and this got me a ban for a while. Luclikly my mate's dad had a field so the A55 was moved up there where we gradually killed it.

Back then petrol was 35p a gallon and I used to wash cars on the forecourt to get petrol......a gallon didn't last long.
Top

First proper crash was in this 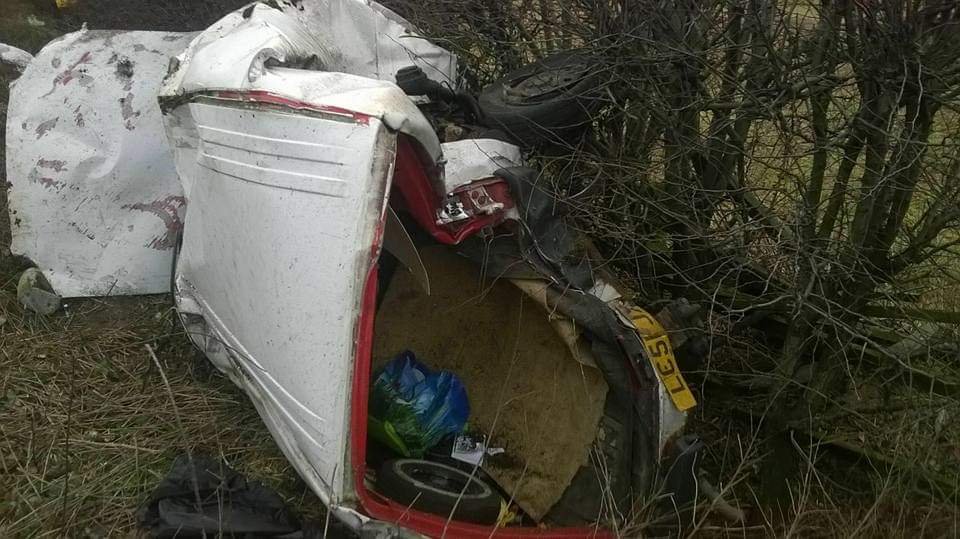 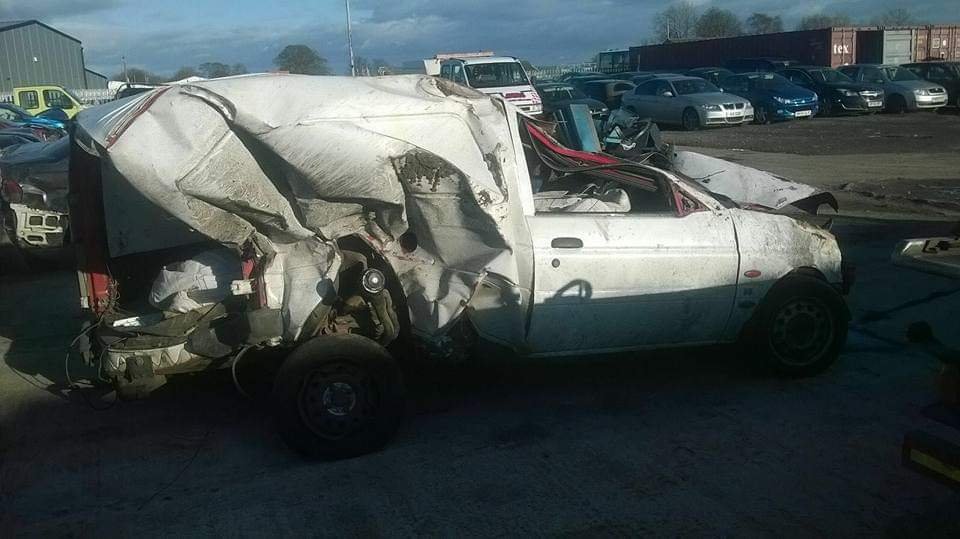 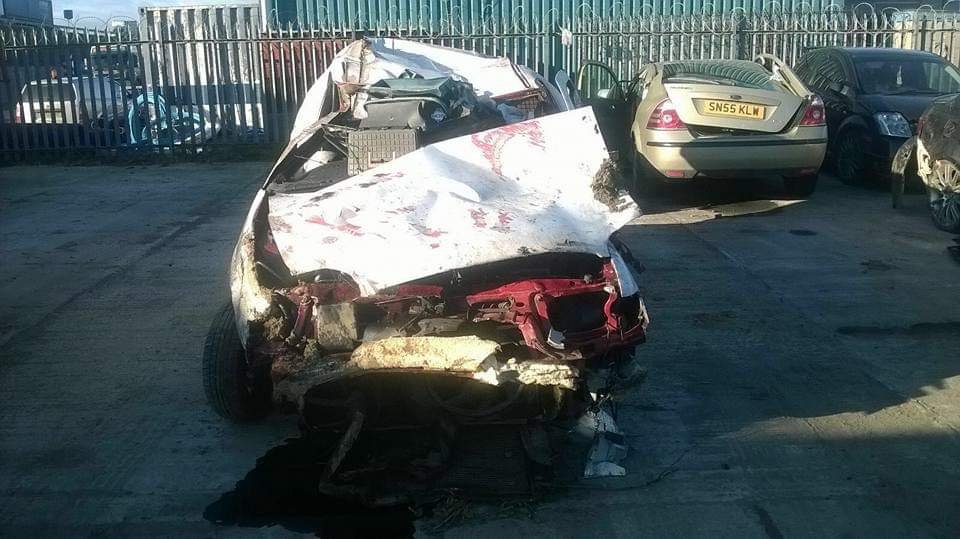 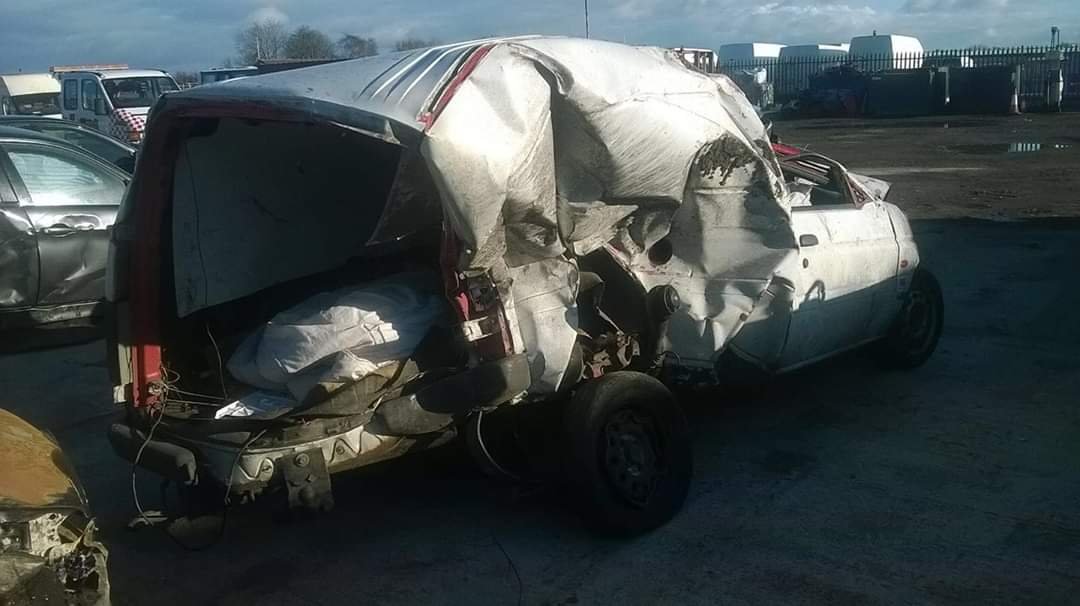