Stroppy Old Tart, or the story of a Triumph Bonneville

Stroppy Old Tart, or the story of a Triumph Bonneville

As promised I've finally started a thread on this bike.

When I originally decided to get a bike licence the plan was always to get an old Brit bike to wobble between pubs & cafes on sunny days, I never intended to ride moderns but appear to have caught the bug more than I thought I would.

Three months after my test I finally spotted a classic I wanted & went to buy it, I knew I had to have it as soon as I heard it running in a shed the sound was perfect. I should have known from the trip home that ownership wasn't going to be pain free. I collected it from SW London & headed back towards Essex around the M25, I got as far as Clacket Lane services when it cut out suddenly leaving me to try & hold the excessively heavy clutch in & try to get over to the hard shoulder while unable to make any hand signals. I think I eventually found neutral which helped a bit. The cause turned out to be the coils were fitted to high in the electrics box, so the seat was rubbing the wires & eventually cut through one so there was no spark. I managed to bodge it back together through a small gap as the seat wouldn't come off due to a spinning captive* nut. Anyway, I got it home looking like this. Well it had a front mudguard but it kept coming loose so it was off here to get repaired* with araldite as it was only a nasty plastic one anyway. 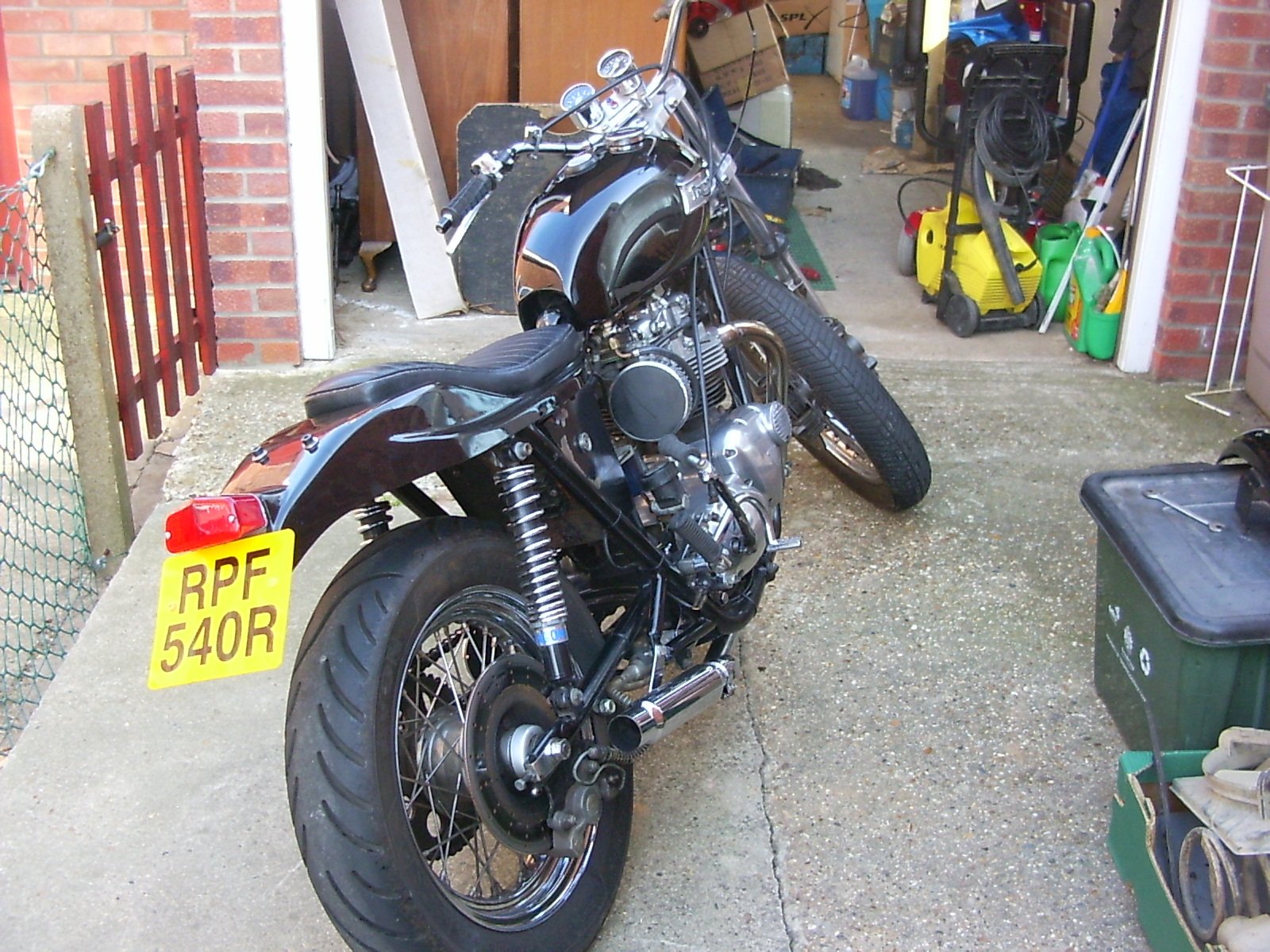 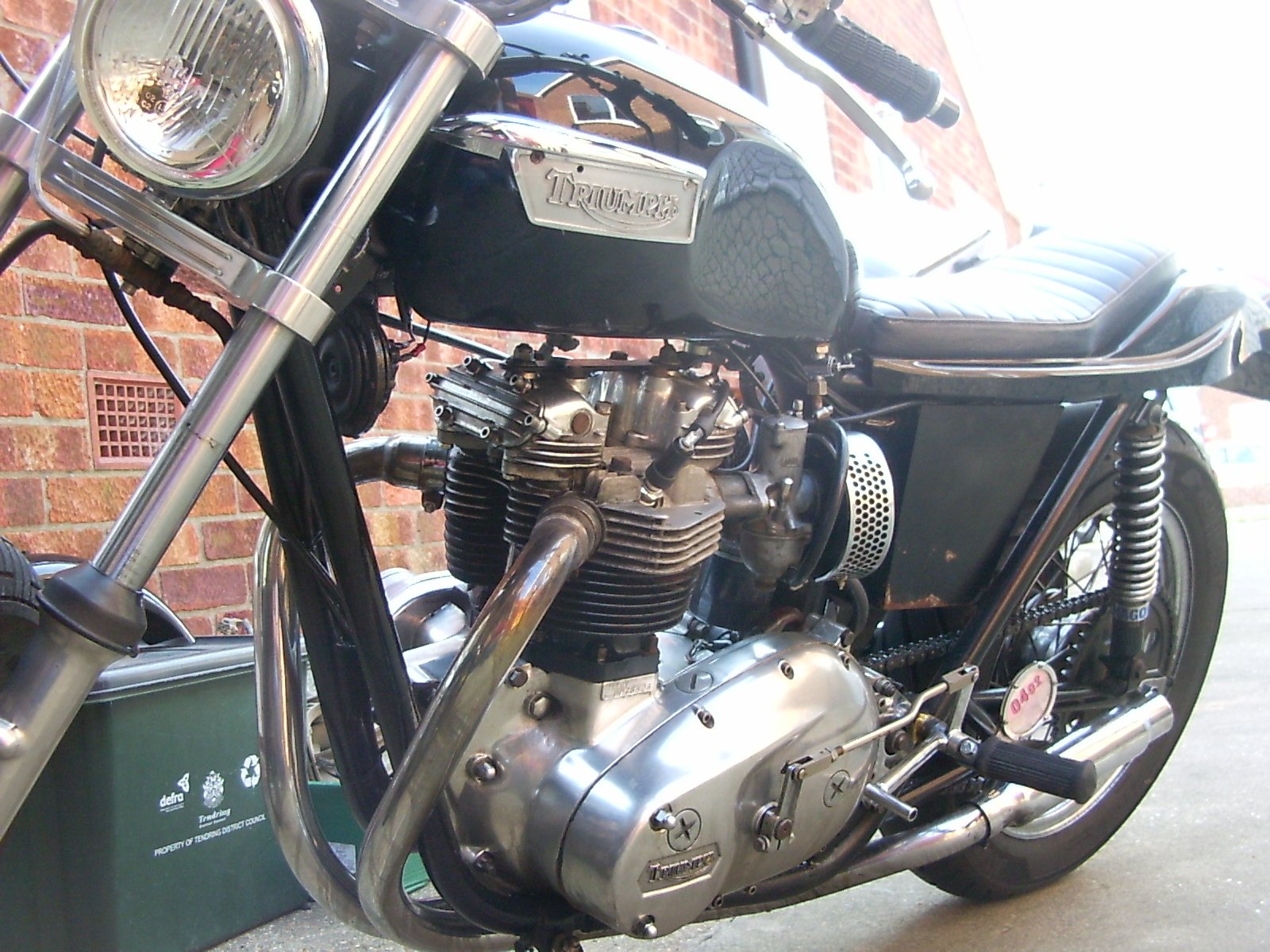 That trip also proved neither the speedo or rev counter worked. I found out shortly after that the reason the rev counter didn't work was it had an internal short so the bike didn't run with it connected. The speedo proceeded to fall apart & collapse into it's housing within a few months. I just rode around with an oil & main beam light as my total instrumentation.

Within a couple of months I got sick of random wires falling off from every connector on the bike & it not charging properly etc so it got a total rewire with the half missing original charging circuit replaced with a Boyer Power Box that allowed battery-less running. That was done within a day, there are surprisingly few wires on a bike with no indicators etc. This was followed by repeated breakdowns every 2-3k when the Boyer ignition boxes kept dying even though they were fitted correctly with the type of leads they claim to require. I upgraded to points after one experience of having to push the bike 9 miles home. I never had another breakdown due to a lack of sparks again. This was also cheaper than buying yet another Boyer box.

Various other bits used to fall off regularly as I slowly found out that the professional* rebuild the previous owner had paid about £3k for involved doing things up till they stripped, backing them off half a turn & gluing* it with bathroom sealant. This is about the time I found the reason it used to miss third at times was a huge lump of silicon stuck under the gear cluster because some professional* had decided to seal the oil seal to a spinning shaft with it...

At some point I found the original style air filters it had choked it above half throttle, so swapped them for some cone style ones, which allowed me to ride it hard enough to discover it liked to overheat & nip up. More on that later... 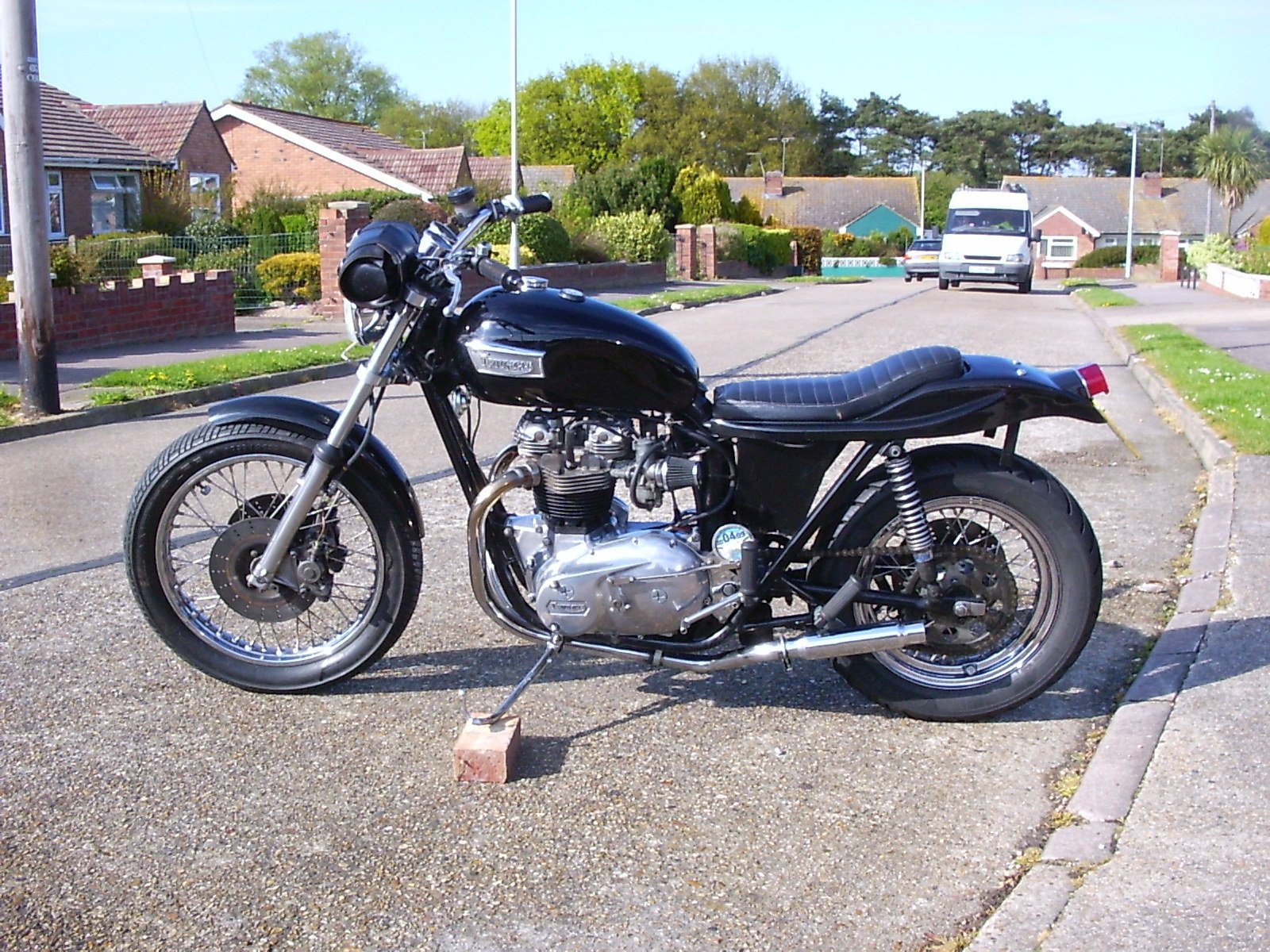 I rode it like this for a few years sodding about with a few bits, wondering if it was running lean to cause it to nip up etc. I never thought it was a lack of lubrication as it'd had a full* engine rebuild before I got it. Then one day blasting up the M1 at 80-90 it when bang, with a lot of rattling & a bit spit of flame according to a mate riding behind me. When I got it home & stripped it down the RH piston had lost a chunk of it's crown, which had unsurprisingly ruined the bore. The small end on that side had also seized & the bits falling down had damaged both cams too. Here's a lovely pic for you lot to enjoy of the damage. 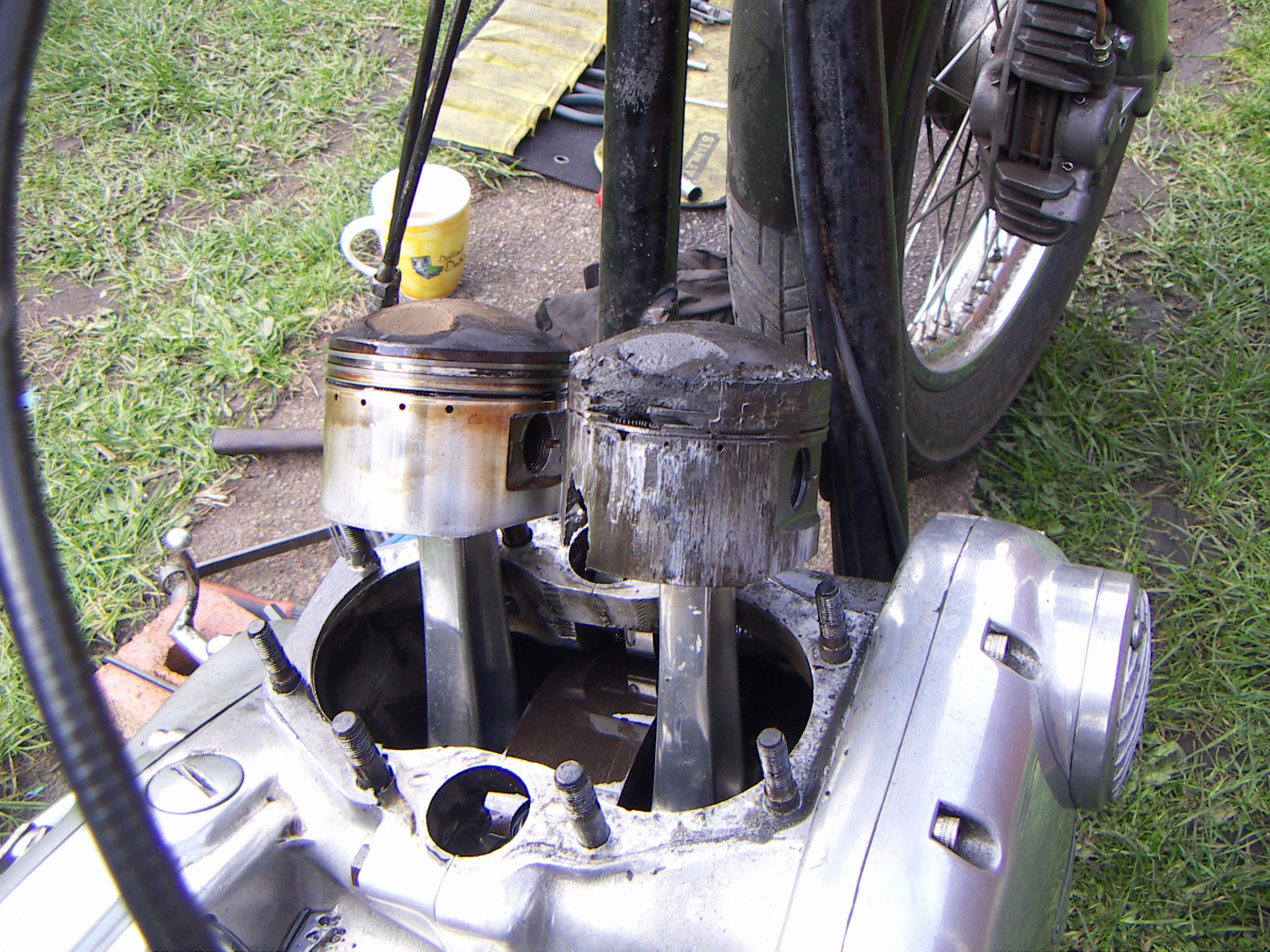 Obviously at this point I decided to strip her right down & sort things out, which is when I discovered the sludge trap in the crank had never been out. So much for the full rebuild. That meant I'd got oil pressure at the light, but it wasn't getting as far as the crank bearings, big ends or flung at the small ends etc. About the only bit of the engine getting oil was the head as that is fed off the return to the oil tank. Eventually I saved up enough to fix the important bits to get her running again, that was £1,800 in parts as I needed new barrels amongst other things. I took the opportunity to upgrade the timing side crank bearing to a roller bearing rather than the original ball bearing effort, this meant I could put a 'Spitfire' exhaust cam in too.

To explain the cam, the 750cc Bonnie got a softer exhaust cam than the 650cc to stop it killing crank bearings. The cam I fitted was E3134 profile like the 650cc had, so upped the power a bit & made it more lively. I also polished the rods as it makes them stronger by removing stress risers.

Have a few random pics of how I spend xmas day 2009. You can see the small end bushes I had fitted, these was originally bearing in rod. Also you can see the cut outs to fit a 21 tooth front sprocket as the smaller than standard rear wheel made the gearing too short. 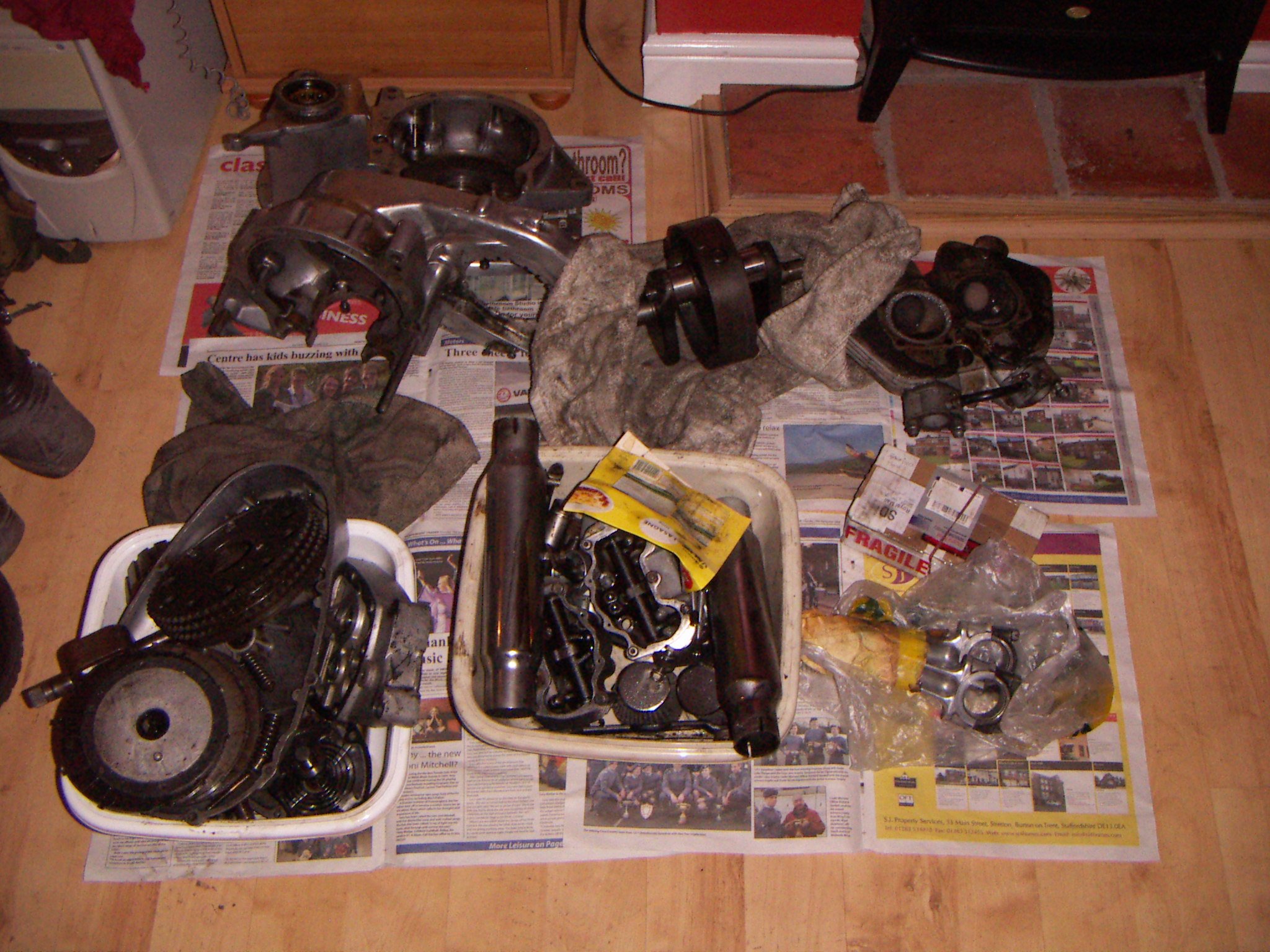 By feb 2010 I'd got all the bits to finish the rebuild & had this sitting in the dining room where I was renting at the time. 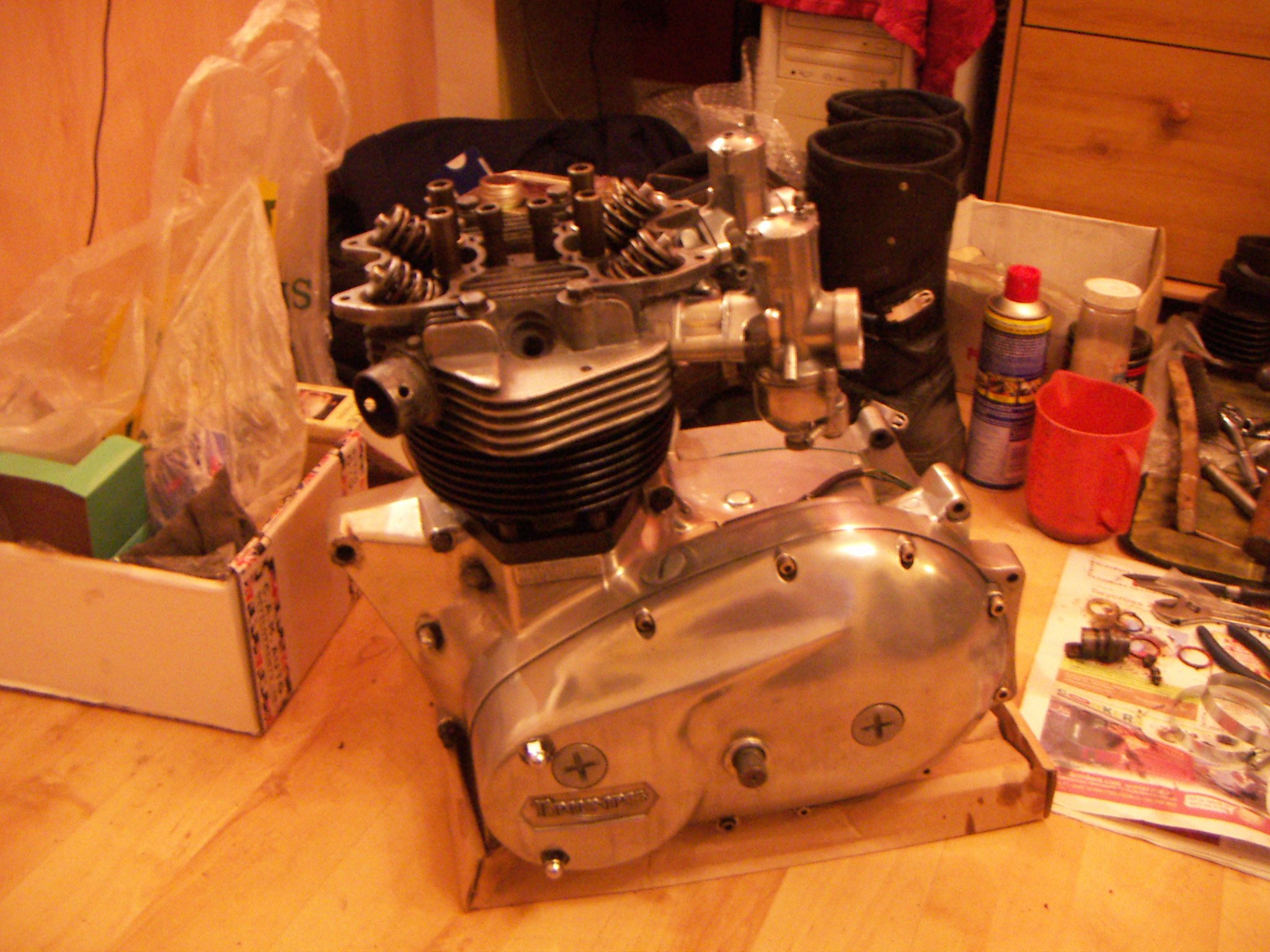 I was rather impressed when I put this back in the bike it fired on the first kick & started on the second.

Ignore the smoke, that cleared up after a few miles. I'd never bothered to clean it all out the RH pipe from when she blew up.

That's the last major work I did on it till recently. I took it off the road when the oil leak from the frame got too bad. On these the downtube on the frame is the oil tank & eventually the welds where the swingarm pivot is let into the tube cracks so the oil falls out even when parked.

I'll update it the current plans & work etc when I feel like typing lots again. I've taken this bike to Lands End, JoG, around half of Ireland & NI, I'll take it further once rebuild as I'm hoping it'll be more trustworthy finally.
Self-appointed Internet God
Top

I do like a Bonnie. Had an oil-in-frame with a 650 single-carb 6T engine in it, basically the remains of a mate's Triton project. Not the most auspicious introduction to Triumph pleasures but I enjoyed the brief time it stayed together. I am one of those blokes who always meant to get another bike but never did. Ho hum.
South's gonna rise again.....
Top

After a lapse of a few years due to restoring a cottage for my ex to take & enjoy I finally stripped Stroppy down to get the frame welded. I got that done next door as I had a custom bike shop there & Rick who ran it was damn good with a welder. The inconsiderate sod has moved to Hull since then, just because he met a woman & fell in love etc. We managed to block every hole in the frame & pressurise it with an airline while spraying leak detection spray (it forms a goo that bubbles as air escapes) around the repair until it was airtight. So that should be solved now.

The wheels are currently away getting rebuilt with new rims as they'd gone rusty & the rear one wasn't even round! It had a section about 8-10" long that was flattened, as if the bike had landed from 10ft up on a flat tyre! no wonder it vibrated as I rode it.

I partly stripped the engine again as I knew it needed new valve guides and the exhaust ports fixing at a minimum. I've found one of the small end bushes I got fitted has spun so they need doing again. I've made a list of things the engine needs that I can't do -

To explain the exhaust ports, these engines have a steel insert that screws into a ali head & the pipe slips over the insert. Obviously if they rattle the port gets damaged as it's softer. When I got the bike the only exhaust mount was on the cans, so the whole pipe could rattle which ruined the ports. As you can see in the pics, at some point I added some oversized brackets to the downpipes to resolve this. I also fitted some brackets underneath going to the centre stand fixings. I can't have a centre stand on this bike as the underslung pipes occupy the same space.

I've picked a machine shop to do the engine work & asked them for a lead time & approx price today. I've started painting the frame, it's getting brush painted with smoothrite. I don't want a perfect show bike, I intend to use it so as long as it looks ok & protects the bike it's good enough. Having said that, I've polished the fork legs, yokes & carbs up already. I'll do the engine cases at some point too.

Still to plan are the new electrics box as the one with the bike is awful, I may well fit a different saddle to make it more comfy. New rear sets as the current ones are awful home made crap & even the pegs are different side to side. New mudguards both ends and I need to pick new instruments etc. It's still a work in progress.

Finally to bring it right up to date.

This is the back wheel, pic from the wheel builder today.

And this is Stroppy getting a bath at the weekend ready for me to start painting. 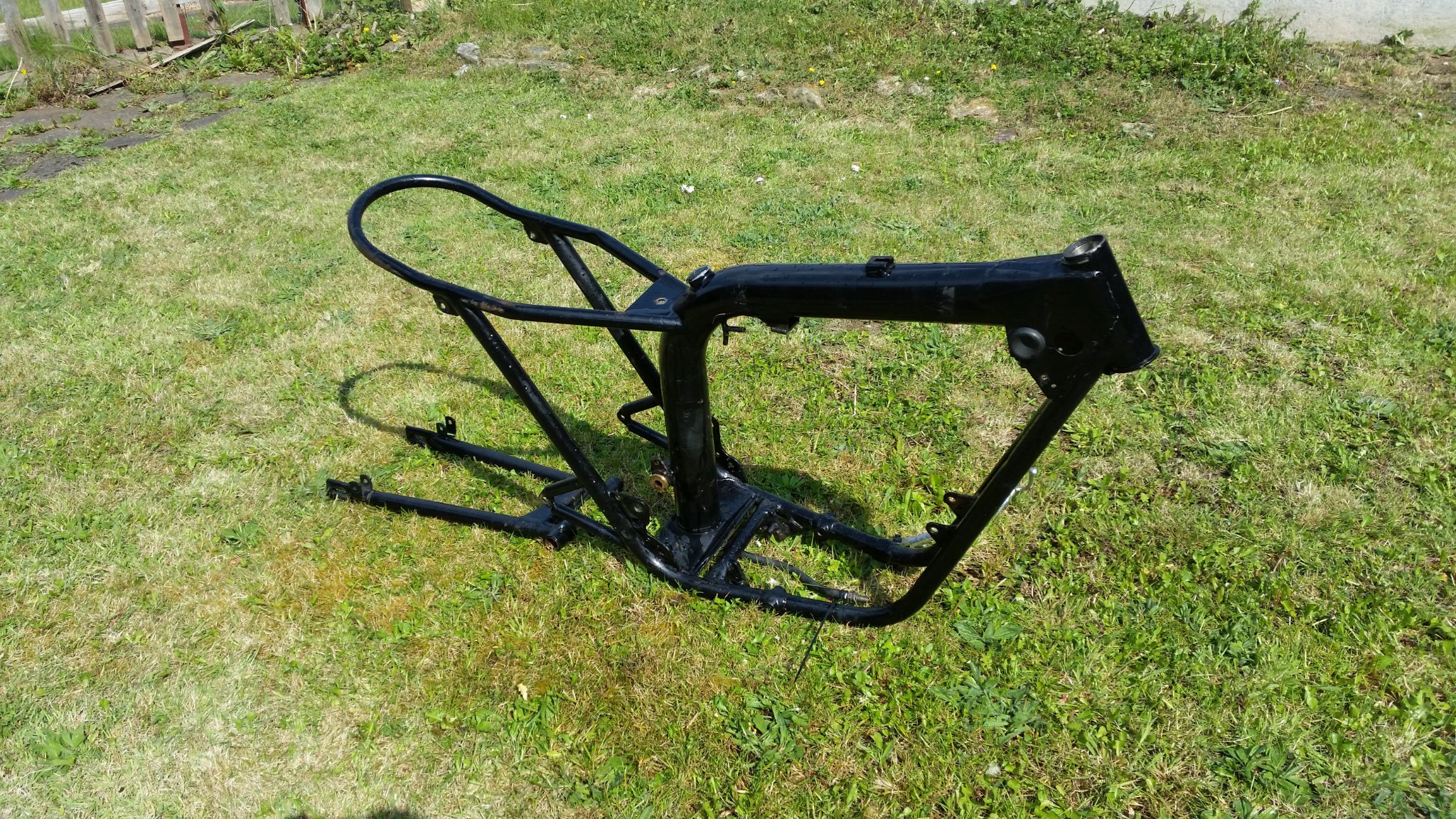 Plus some polished bits I've done over the last few weeks. 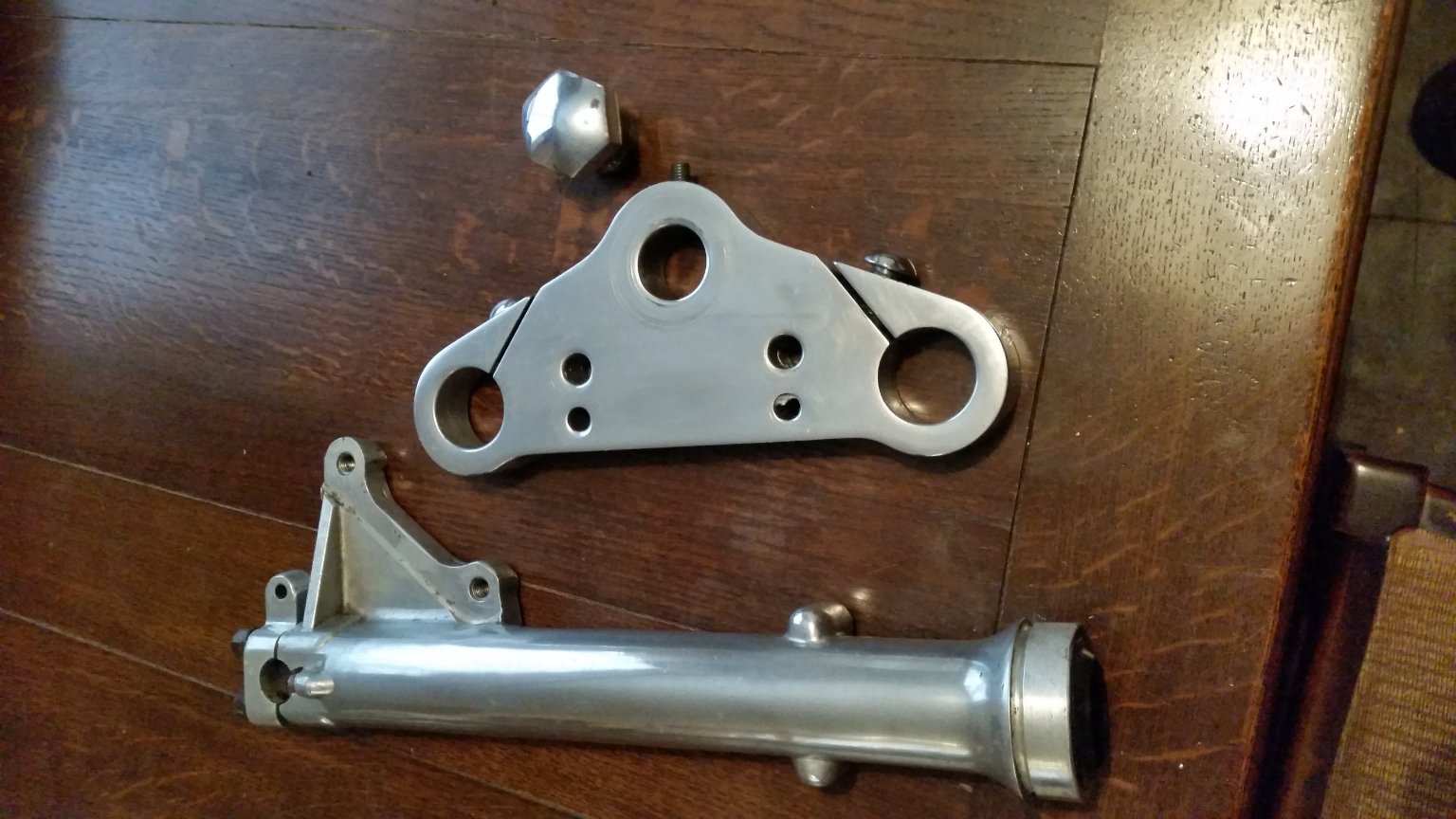 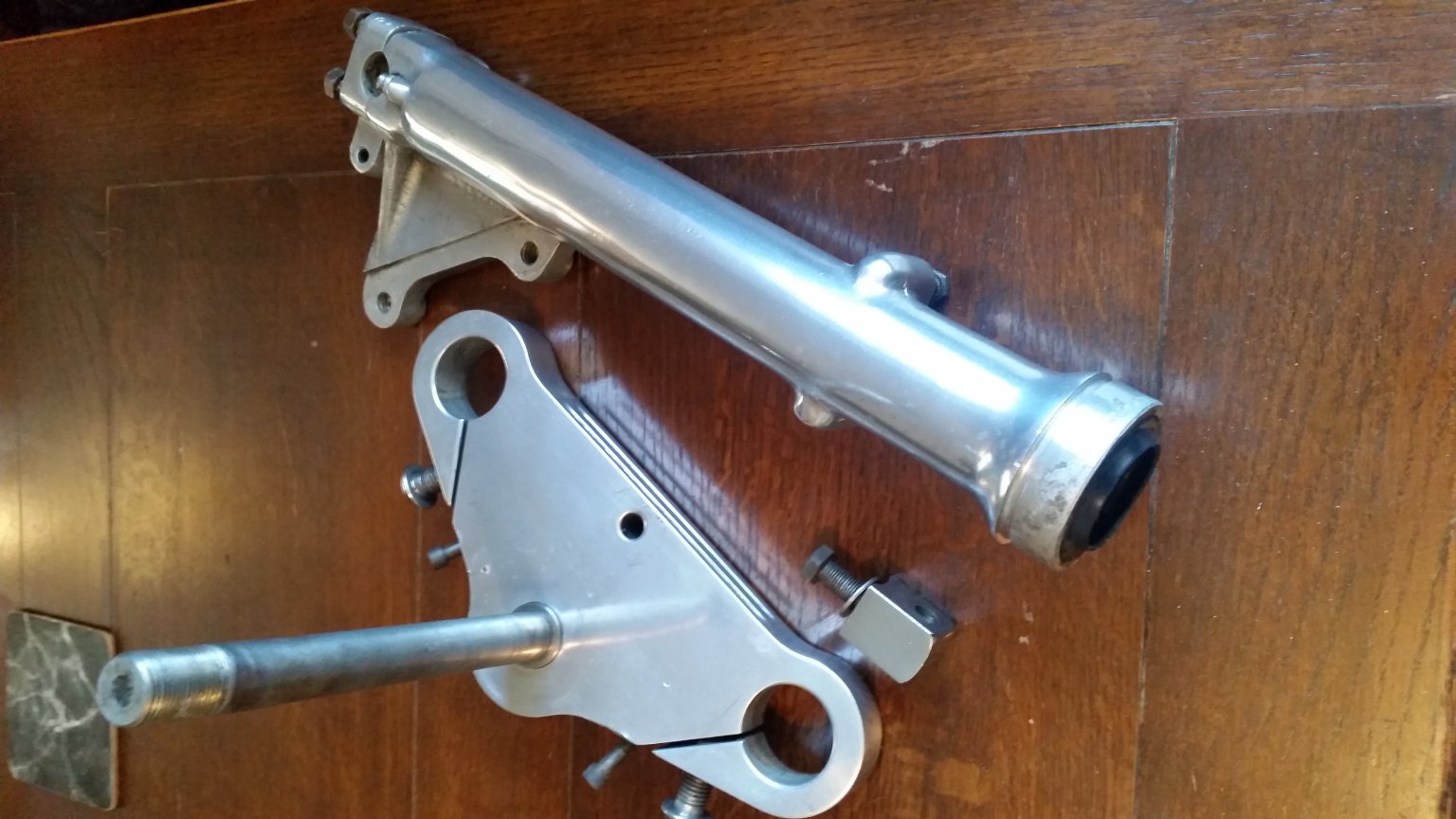 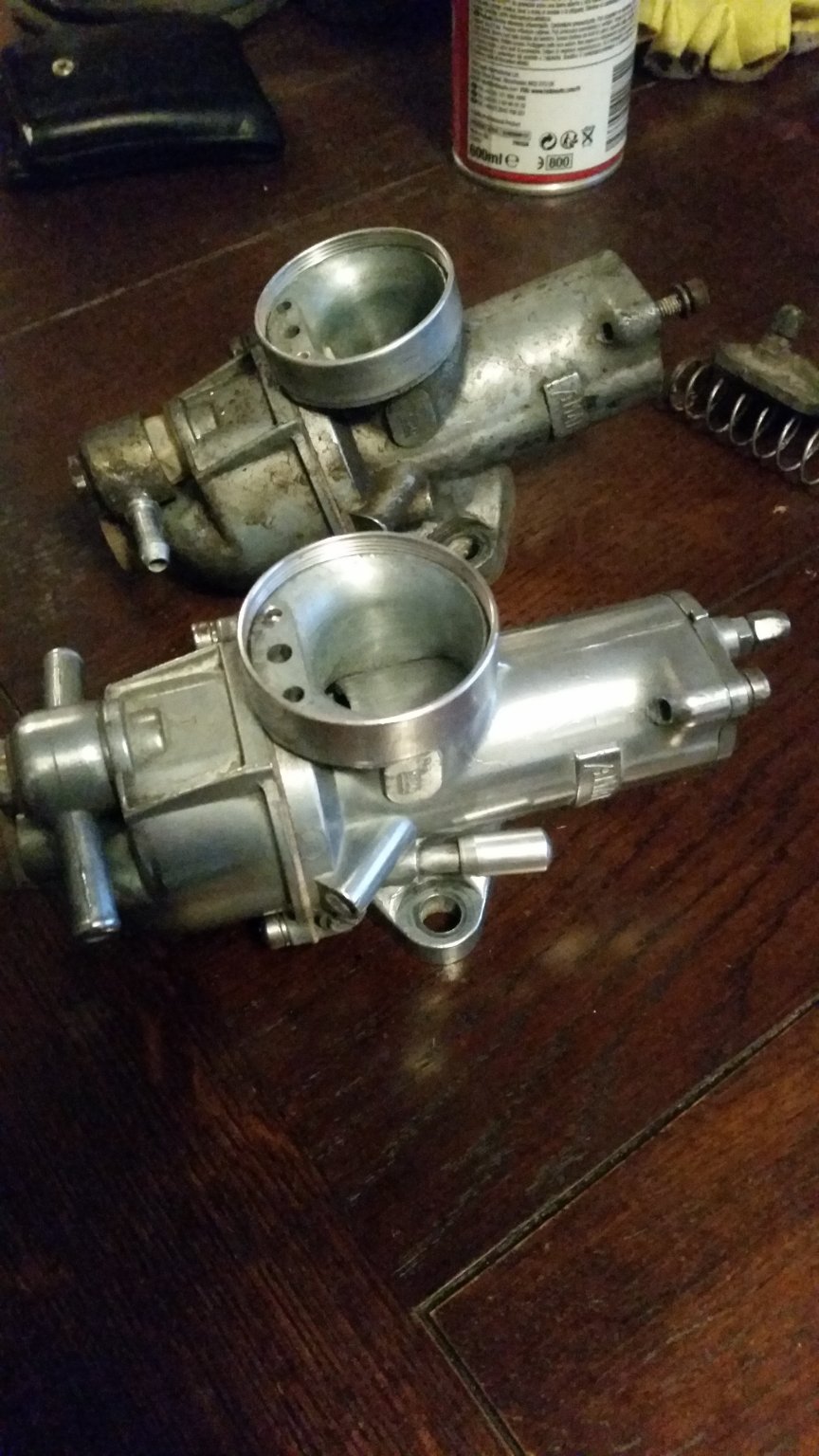 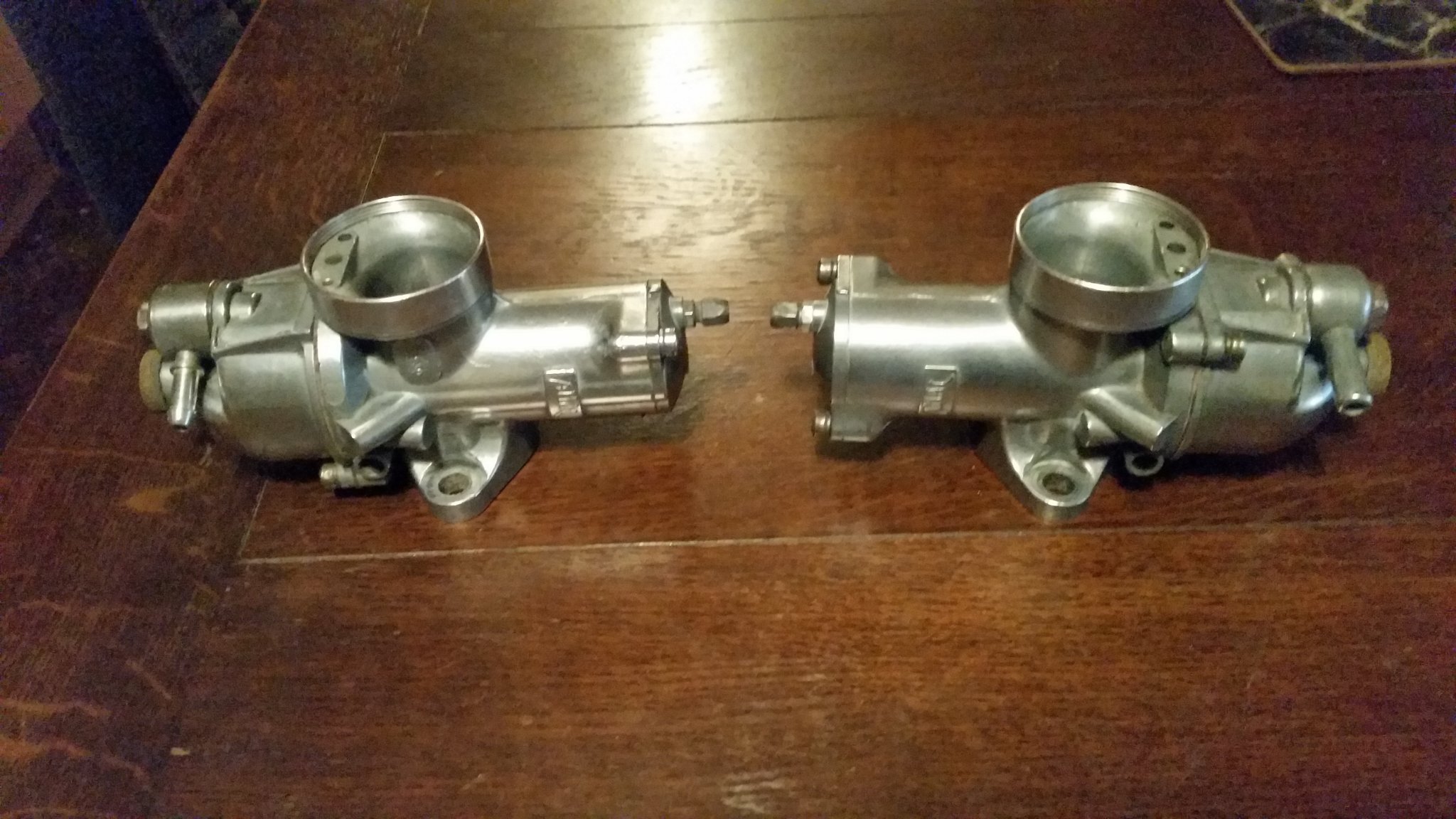 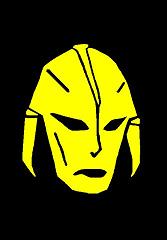 This interests me greatly. Carry on.
Top

Not much to carry on with currently. The frame is in my utility room with the first bits of paint drying over the bare patches. If it comes out nice enough I'll give the whole thing a coat of it.

I'll try to put up some stories of where it's been if you want, her biggest moment of disgrace was the clutch falling off while on the Dublin ring road heading back to the ferry. I can kind of forgive her that though as she lasted a week longer than my ex's Sportster that tried to throw it's exhaust away several days earlier.
Self-appointed Internet God
Top

Disappointed. Not into bikes. Was hoping for a Pontiac.
Top

Not since it was welded, didn't you read the posts?