The time for me to start a thread or two for my various old heaps is well overdue, so let's start off with the latest entry to the fleet. 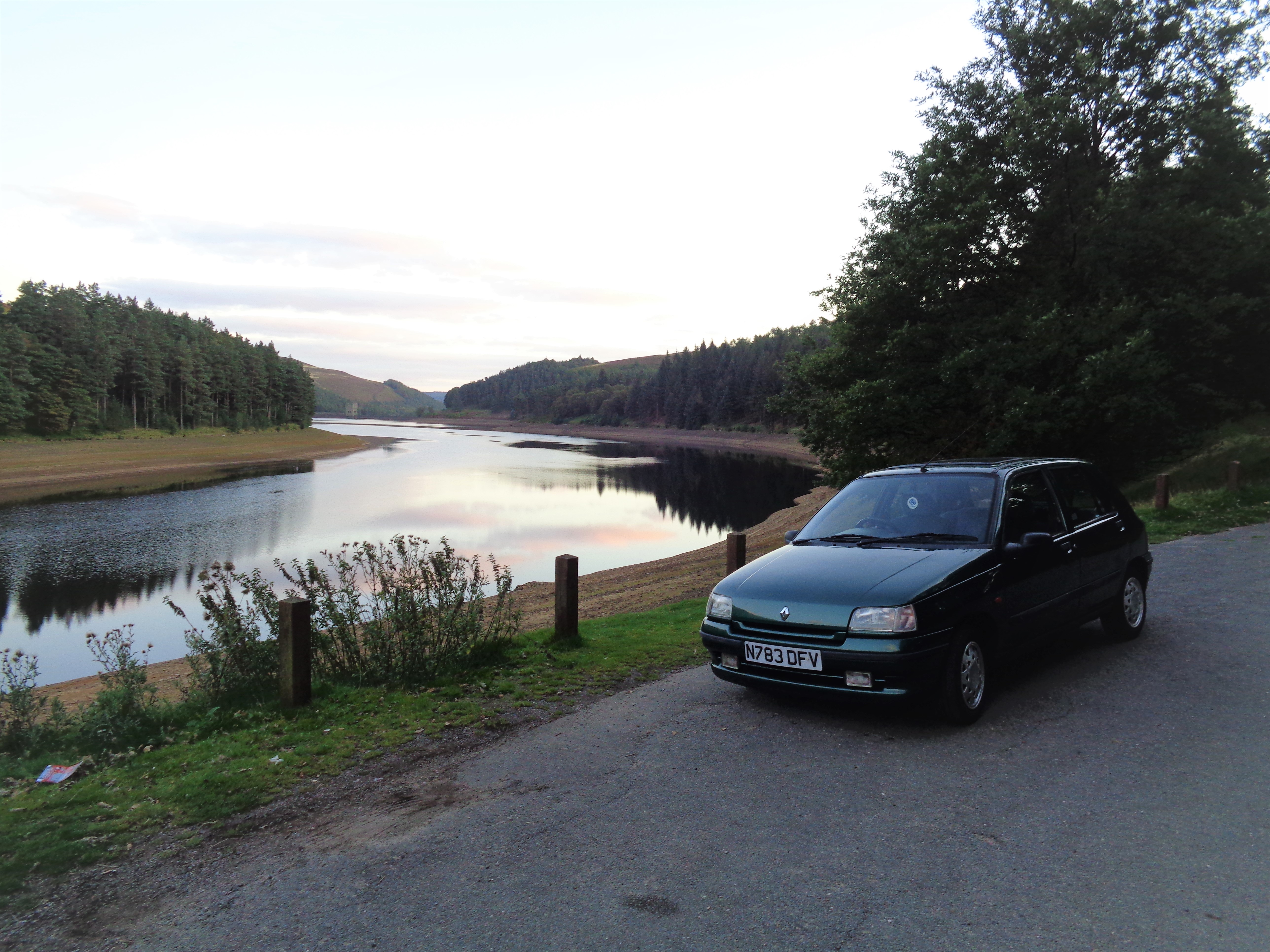 
It all started with Mrs_Renault Sierra's need of a small, economical, hopefully reliable car. Unfortunately finding such a thing these days means scrolling through pages of bland dredge and poorly written adverts in a desperate attempt to avoid owning something soul destroying. Then, when searching for something else on Autotrader, this Clio 1.4 RT appeared like an oasis in the automotive desert, a viewing was arranged and a deal was done. Two days later Mrs RS, Conrad D. Conelrad and I set off in the R4 (to be introduced in a later post) on a largely uneventful collection trip around the M60. The only highlight was when the R4's starter solenoid heat seized on the dealer's forecourt and it had to be pushed elsewhere to cool down. 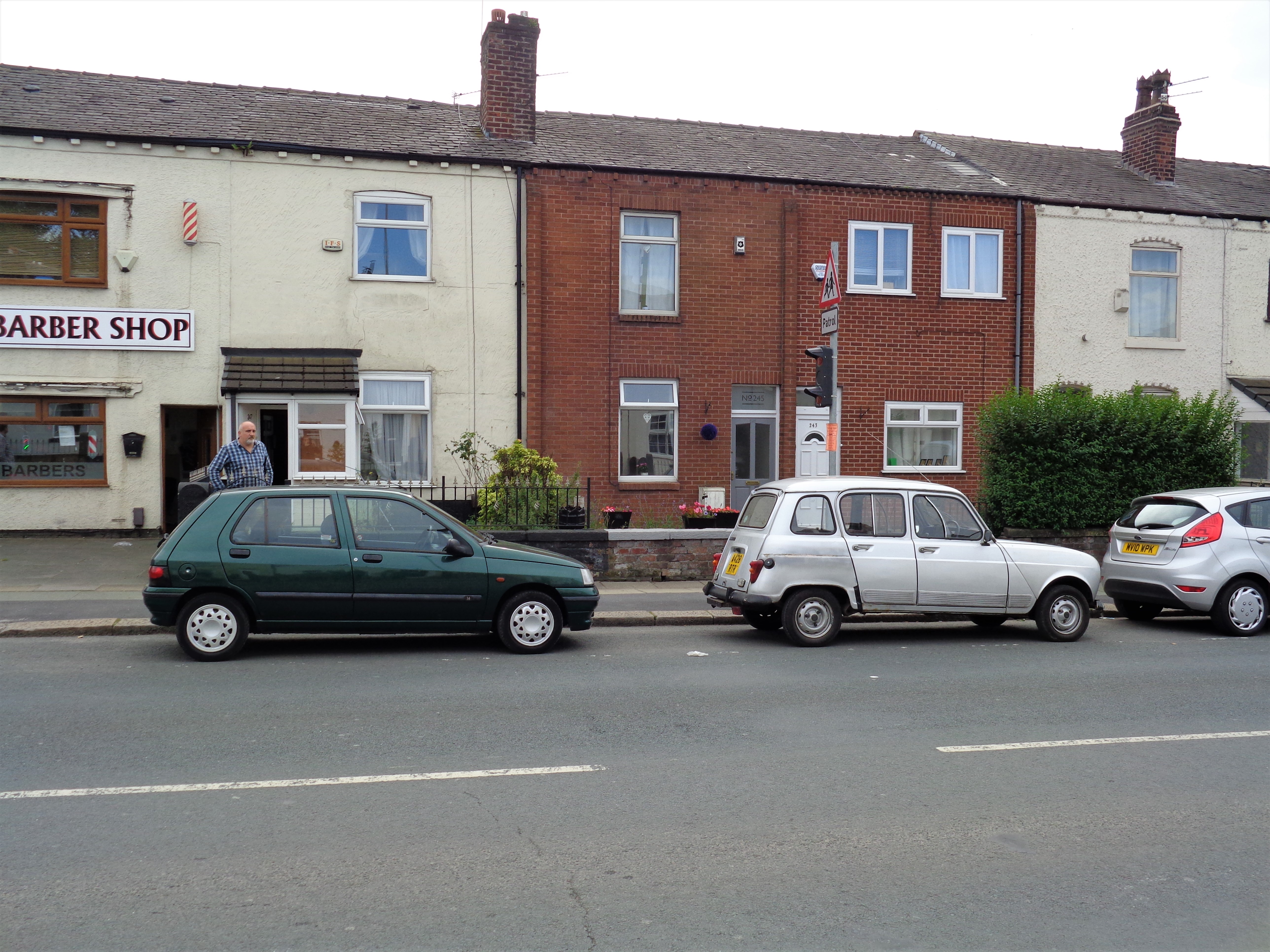 
Bought new by its previous gifferette owner, the Clio has done only 67,000 miles in the intervening 24 years. It came with a full service history which reveals it has wanted for almost nothing (it received a new clutch and a pair of new dampers last year, for instance). Indeed, aside for some giffer scrapes and a bit of crustiness around the rear wheelarches the thing's in almost new condition. 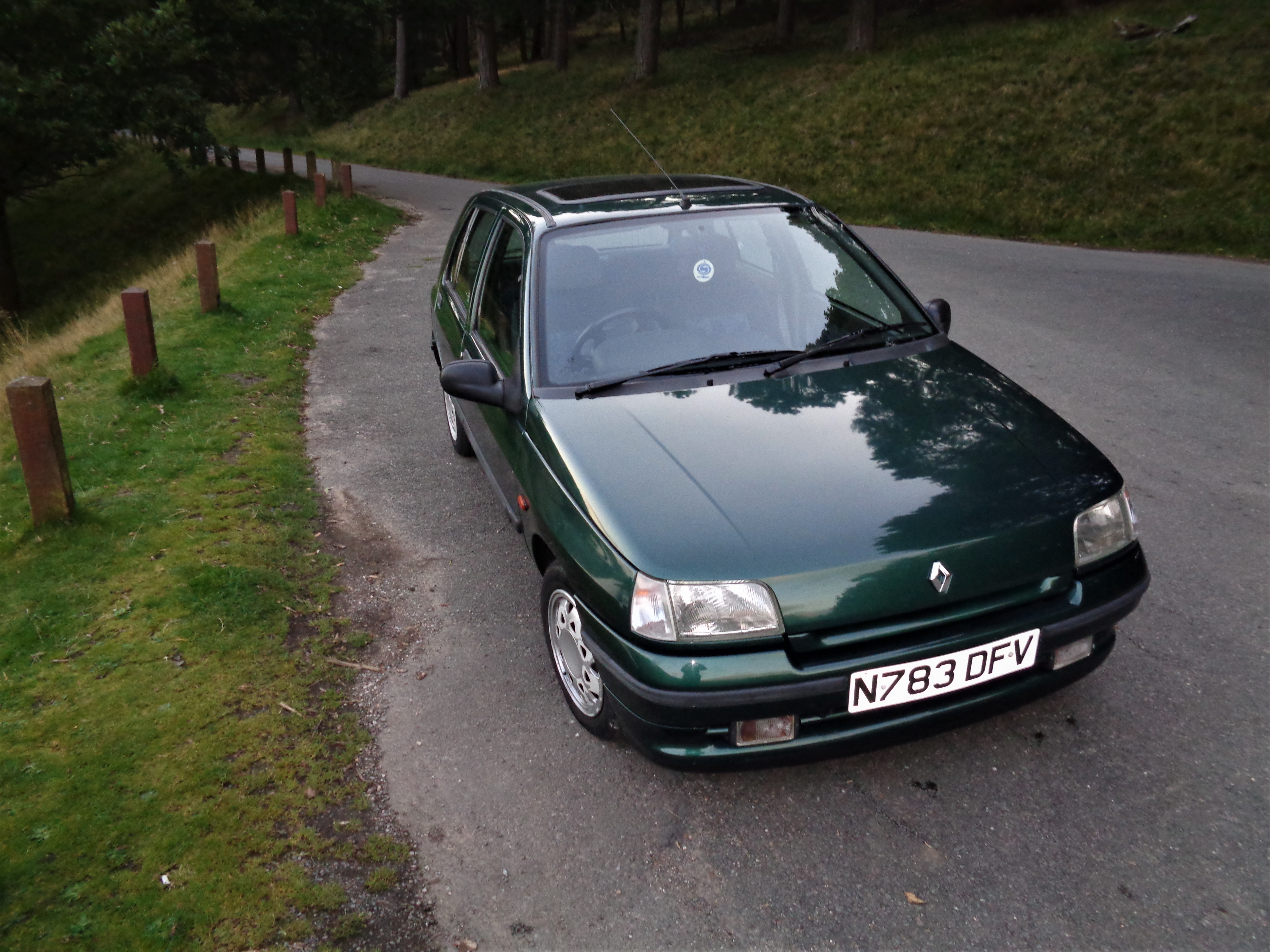 
Being an RT it's remarkably well equipped for a small car of this era, with PAS, electric windows and mirrors, height adjustment and lumbar support on the driver's seat, remote central locking, a manual sunroof and front foglights (sadly not yellow, yet). Apparently Renault faceifted the Clio in 1994 but apart from the rear light clusters I've so far failed to notice any meaningful differences to the early cars. 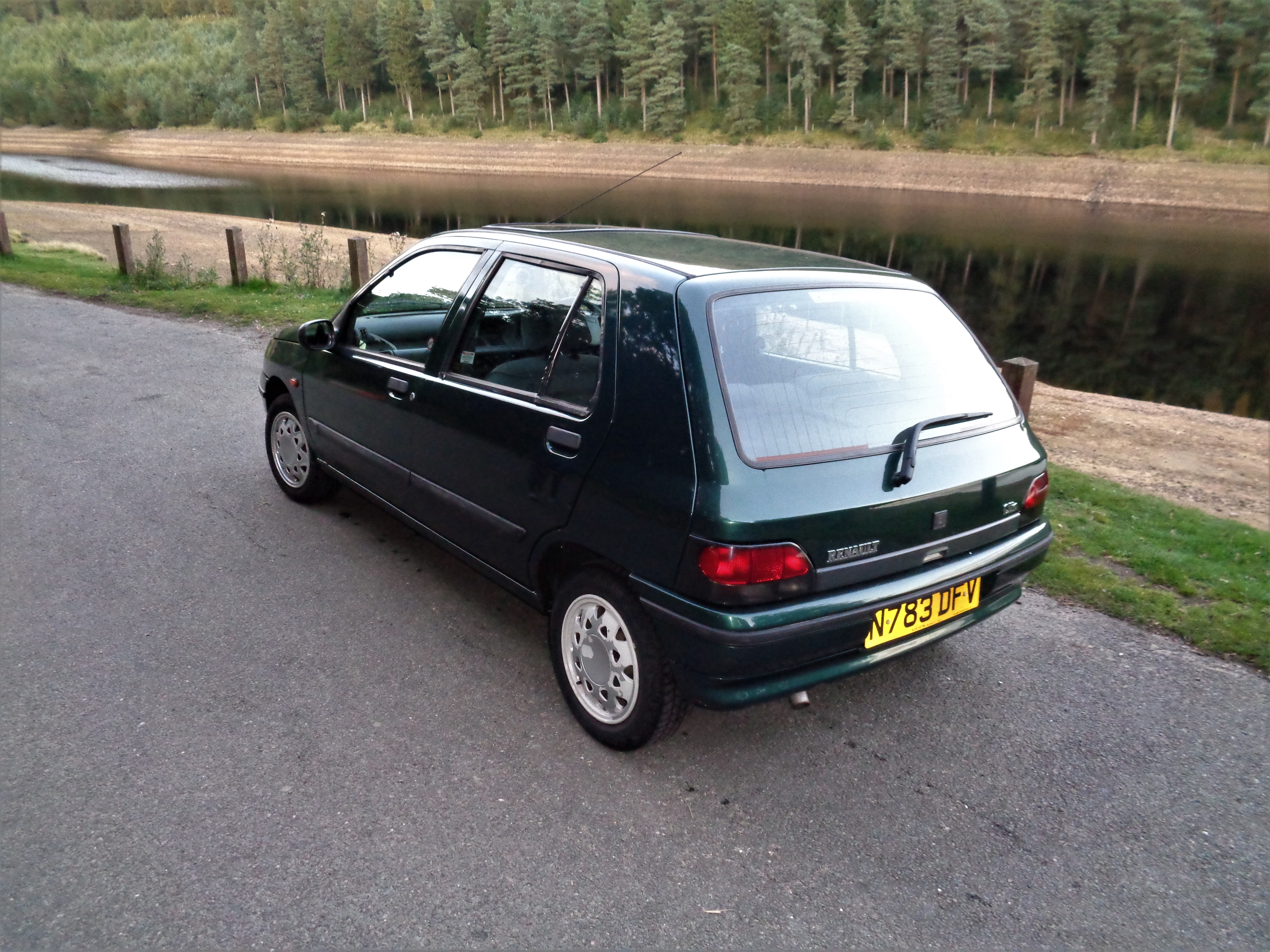 
First impressions so far have been good. The interior's spacious, as is the boot. Few could better Renault when it came to seating, and true to form the seats in the Clio are superb. The real standout feature, though, is the sheer quietness of everything, the engine's barely audible below around 3,000rpm and wind and road noise is almost unnoticeable, it being entirely possible to hold a conversation at motorway speeds whilst barely more than whispering. 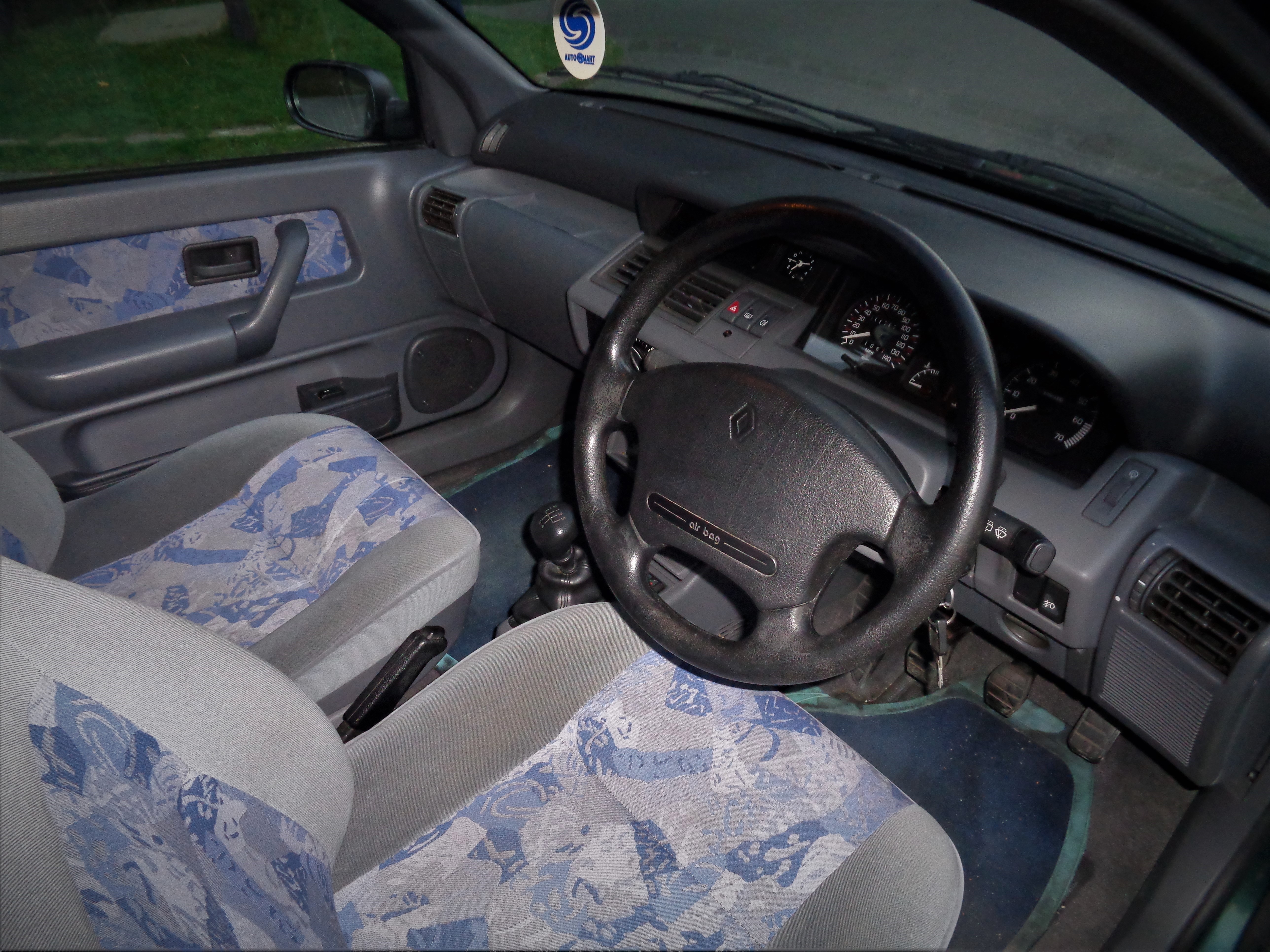 
Sadly the ergonomics are a bit of a mess, with switches scattergunned all over the dashboard out of easy reach. The R4 does this much better, and my BX better still. At least you get column mounted stereo controls and a coinholder for all those French toll booths, plus in true French fashion the ashtray is a fine bit of engineering. 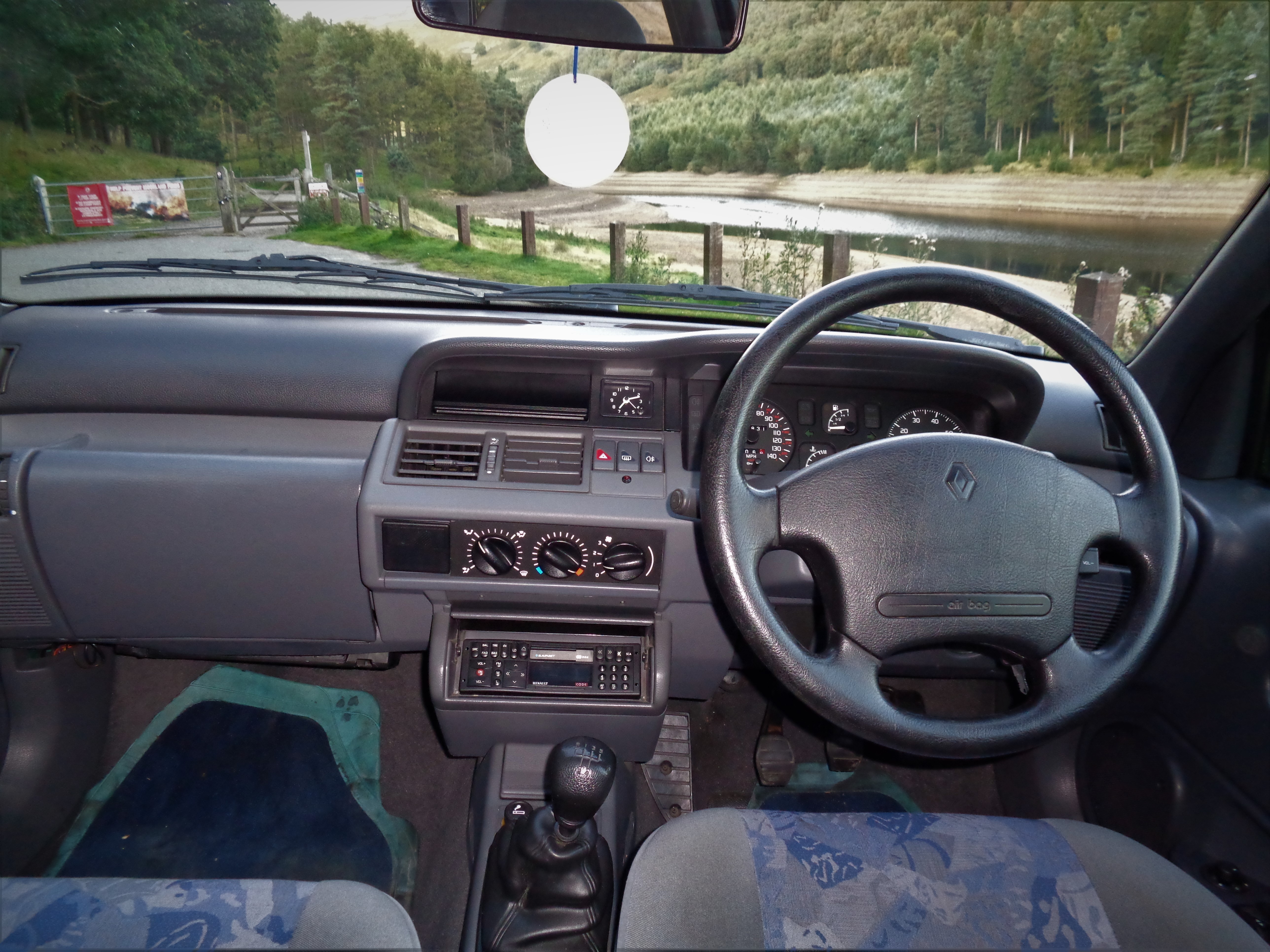 
The engine is the 1,390cc Energy unit (effectively just an old Cleon block with a belt driven overhead cam and crossflow hemi head) churning out 80bhp and 79lb/ft of torque and it does the business well enough, torquey and low revving in everyday driving but with a decent lump of power above 3,500rpm. At no point could it be considered a particularly inspiring or characterful engine, but that's fine. In fairess I reckon this one could do with a bit of loosening up after years of giffer usage as it feels a touch flat given the power outputs. 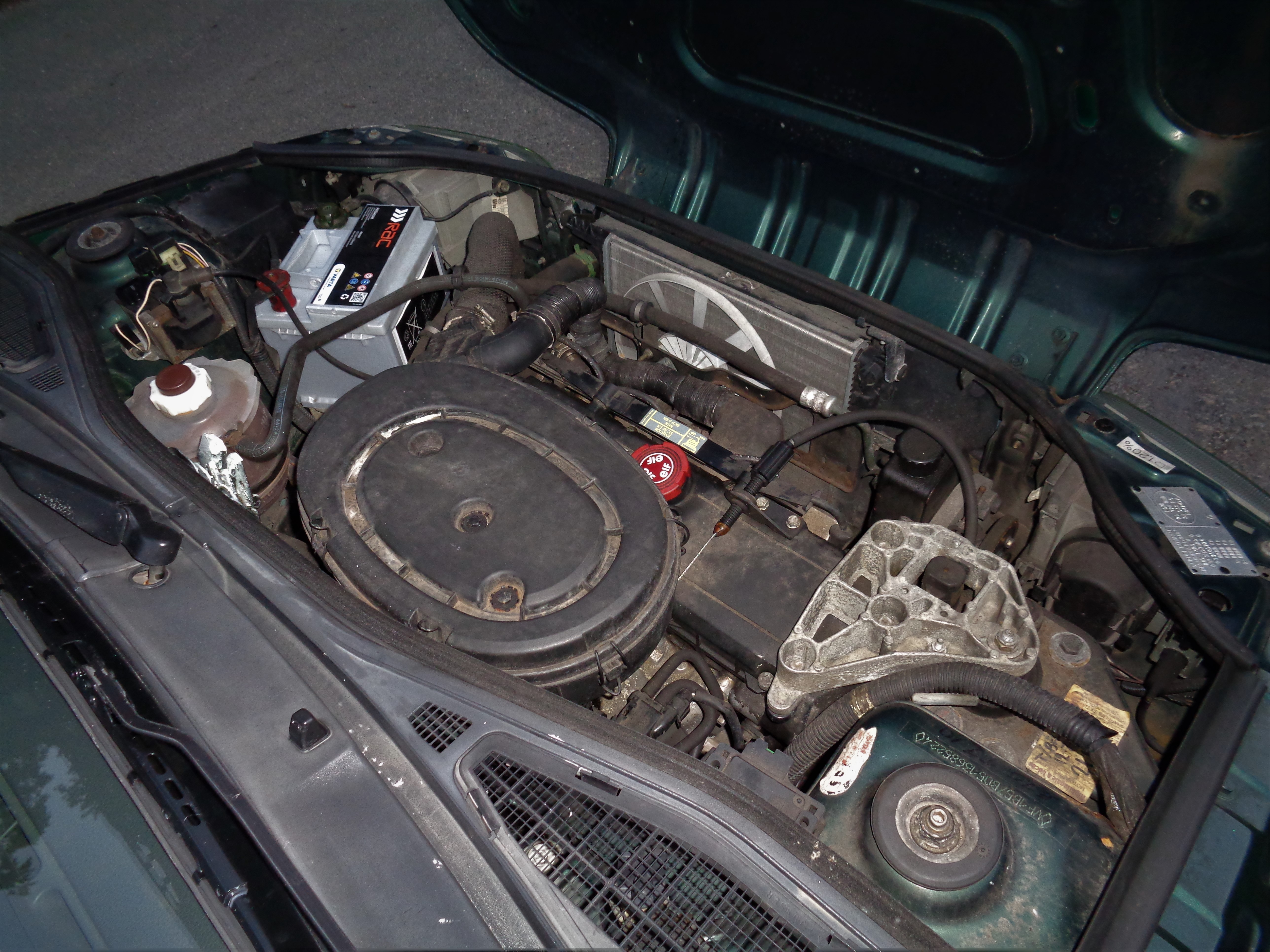 
Overall the Clio drives well, with minimal body roll, little understeer and limpet like grip. The driving controls are all fine, the steering is light but provides plenty of feedback, the gearchange is slick and precise although the brakes are a bit sloppy. For the most part it goes about its business in a completely unfussed, unexciting way but get it on the right road and it can actually be quite fun. More surprising is that the ride isn't all that spectacular, the suspension's soft but it does tend to pitch about a bit and can occasionally thump over ridges and potholes. It's definitely not a patch on earlier Renaults in that regard.

So, plans? There's not much that really needs to be thought about, the crusty bits need sorting and a good rustproofing session will be had before winter. Otherwise the only mechanical malady so far identified is a dodgy thermostat, a replacement for which has been acquired. The overall plan is simply to keep the car in the condition we found it and hopefully get years of reliable service out of it.
Top

Looks tidy enough but thought you was looking for an auto?
Top

That was the plan, but big cars were ruled out and we quickly found that small autos are either terrible or expensive, or often both. We did look at Kangoo automatics but they were all twice the price of this and none of them were as nice.

Mk1 Clios were never really considered until this showed up in a fairly broad search (I've never really thought that much of them), but it ticked all the boxes but the gearbox so it was a no-brainer.
Top

That looks way too decent for you having bought it.
Heil mein de Pfeffel!
Top

Indeed, it is far too good for me.

I'm hoping that it'll be much easier to keep this in good nick than trying to turn my usual abused, rusty shitheaps into something nice.
Top

And so to the other small Renault on the fleet. 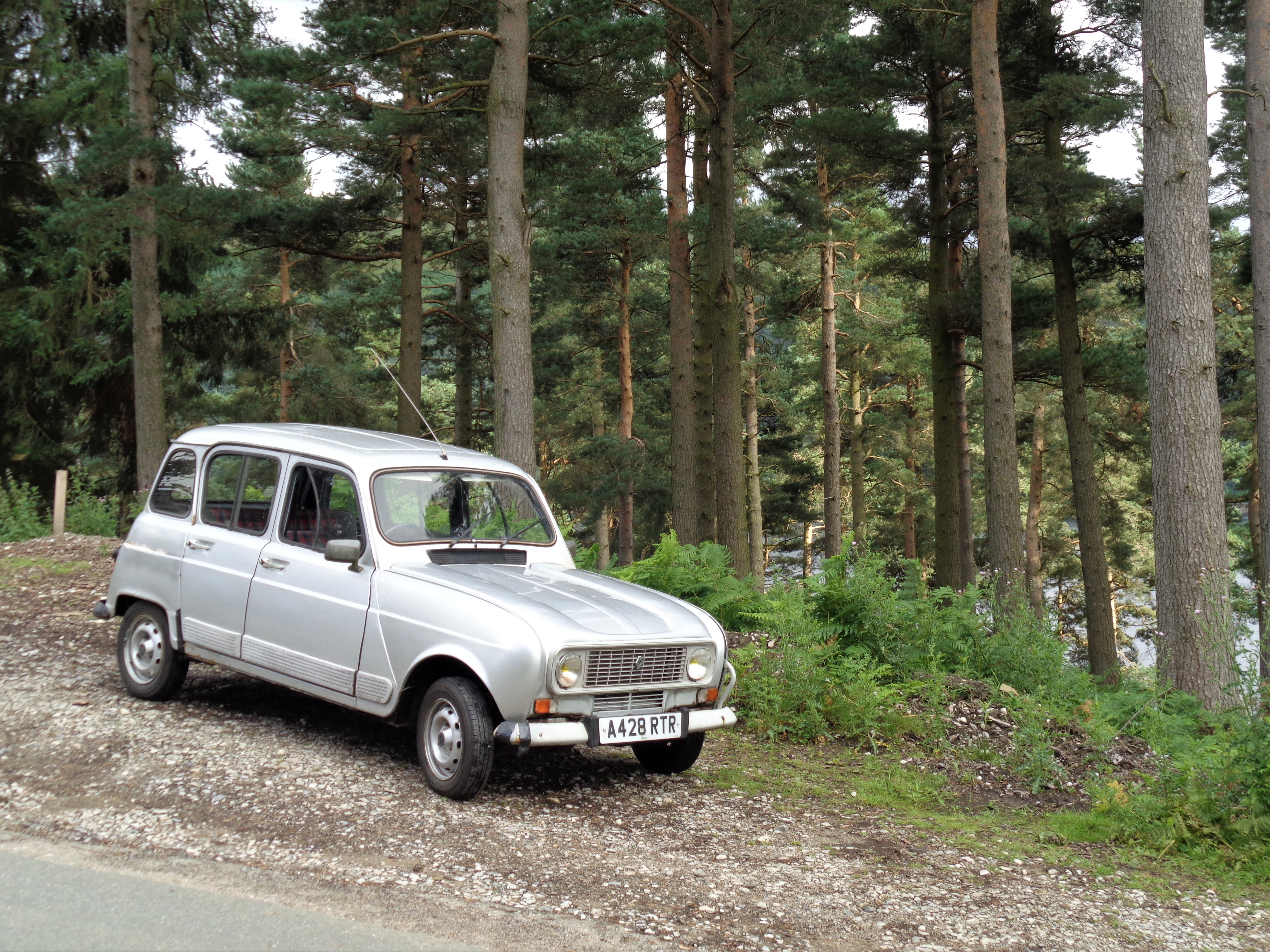 
I’d not set out to buy a Renault 4, I’d instead been looking for a Superfive but one day this GTL came up in my eBay searches. The advert was terrible, the pictures made it look like little more than scrap fodder and in that light the £1500 asking price was too much. But as I was going to be in the Leeds area anyway I thought I’d take a look for a laugh if nothing else.

The laughs were on me, the little R4 – whilst being the unfortunate victim of a terrible paintjob and innumerable stupid bodges – turned out to be remarkably structurally sound with rust confined largely to bolt on panels. The thing started well from cold, drove, stopped and steered much as Renault intended and there were still months of MoT left. From this moment it was clear I had to have it and to my amazement a lowball offer was accepted (the seller needed it gone quickly and had had no interest until I showed up) and suddenly I found myself a Renault 4 owner. 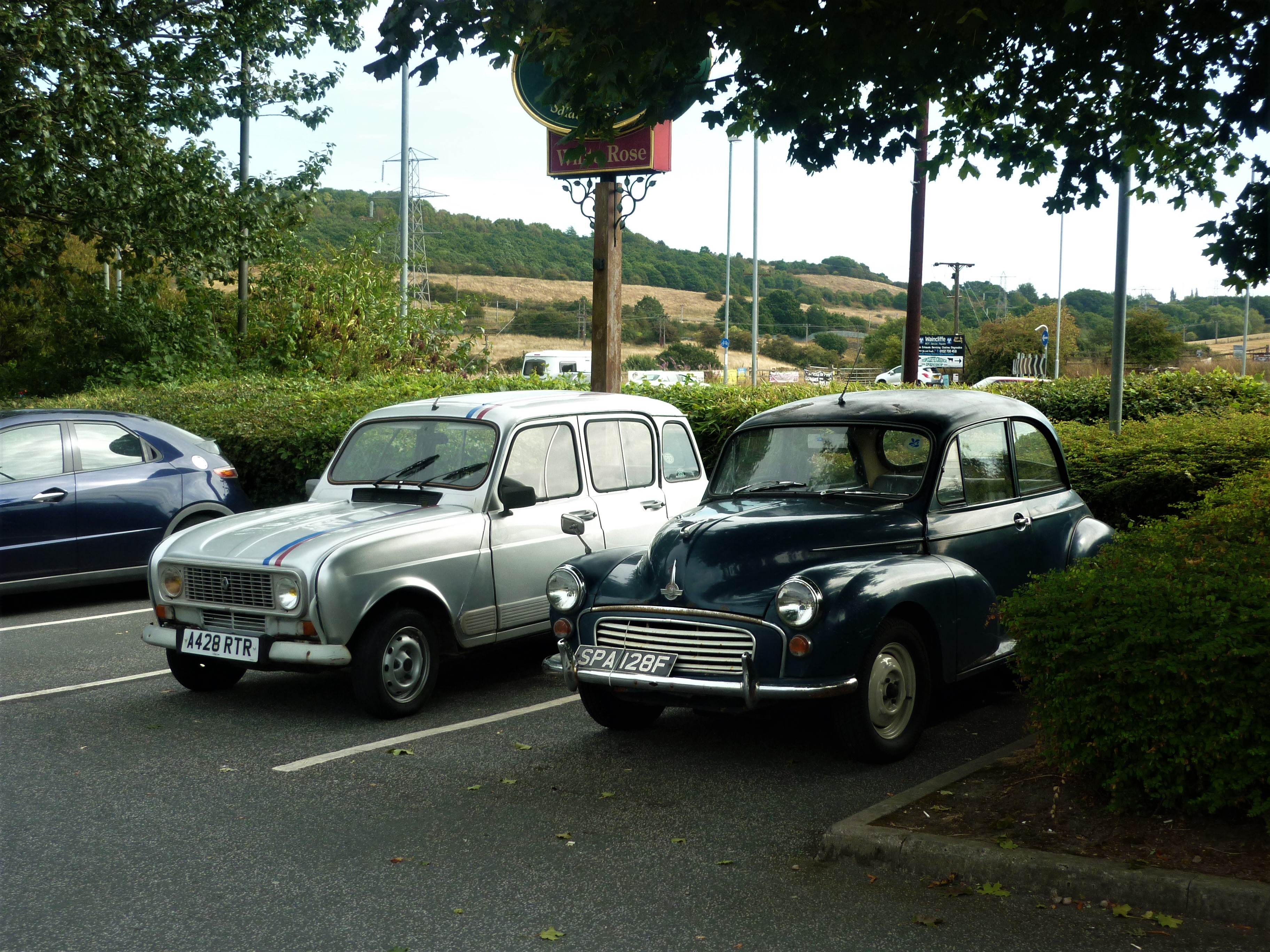 
Here's the R4 as collected, seen here with the collection vehicle. This won't be the last Morris Minor you see in this thread.

The next day I took the R4 to Cholmondeley, where stripe removal was undertaken (Ghosty had hours of fun* removing the red stripe). It looked better but still not what you'd call pretty. 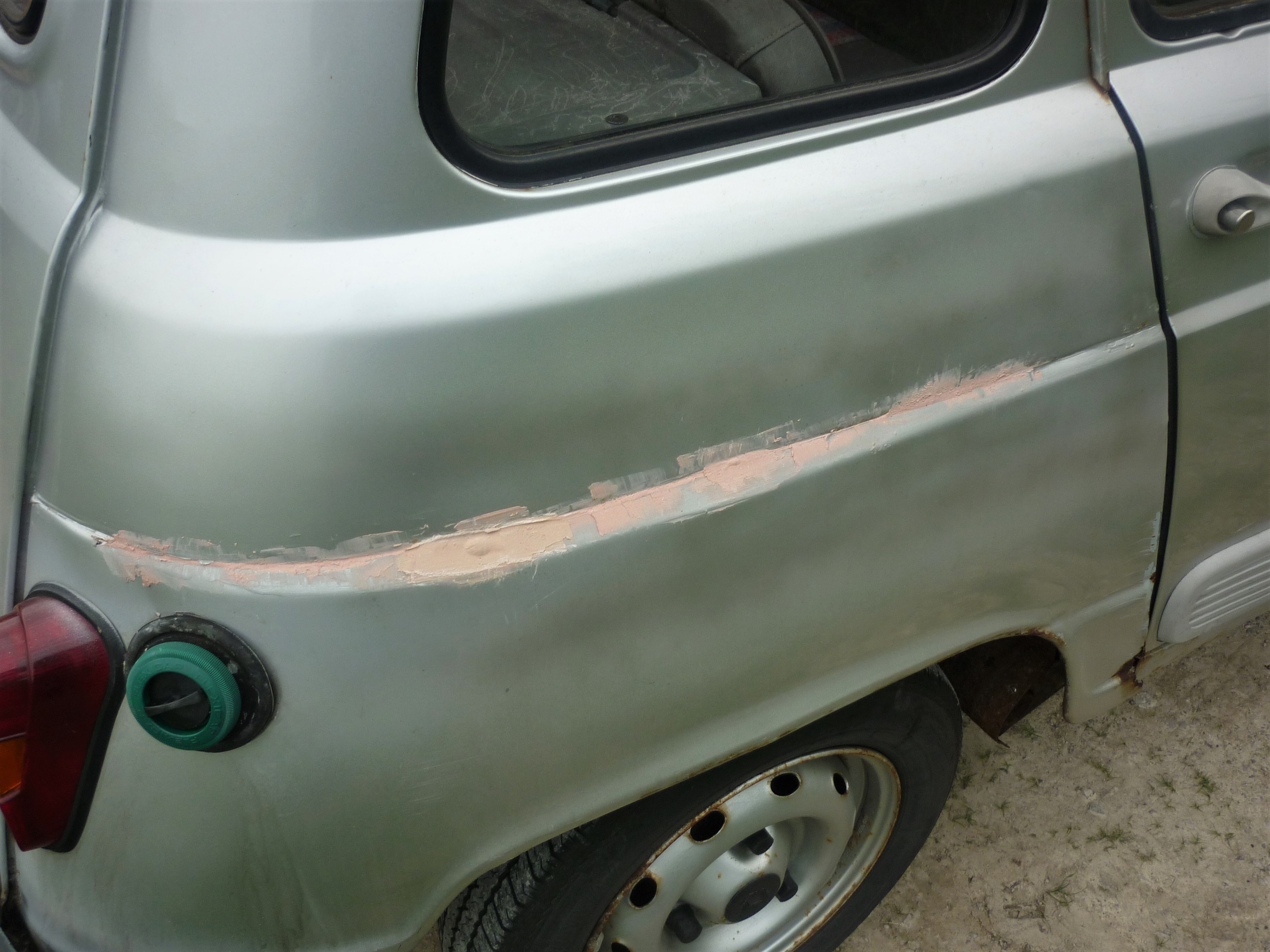 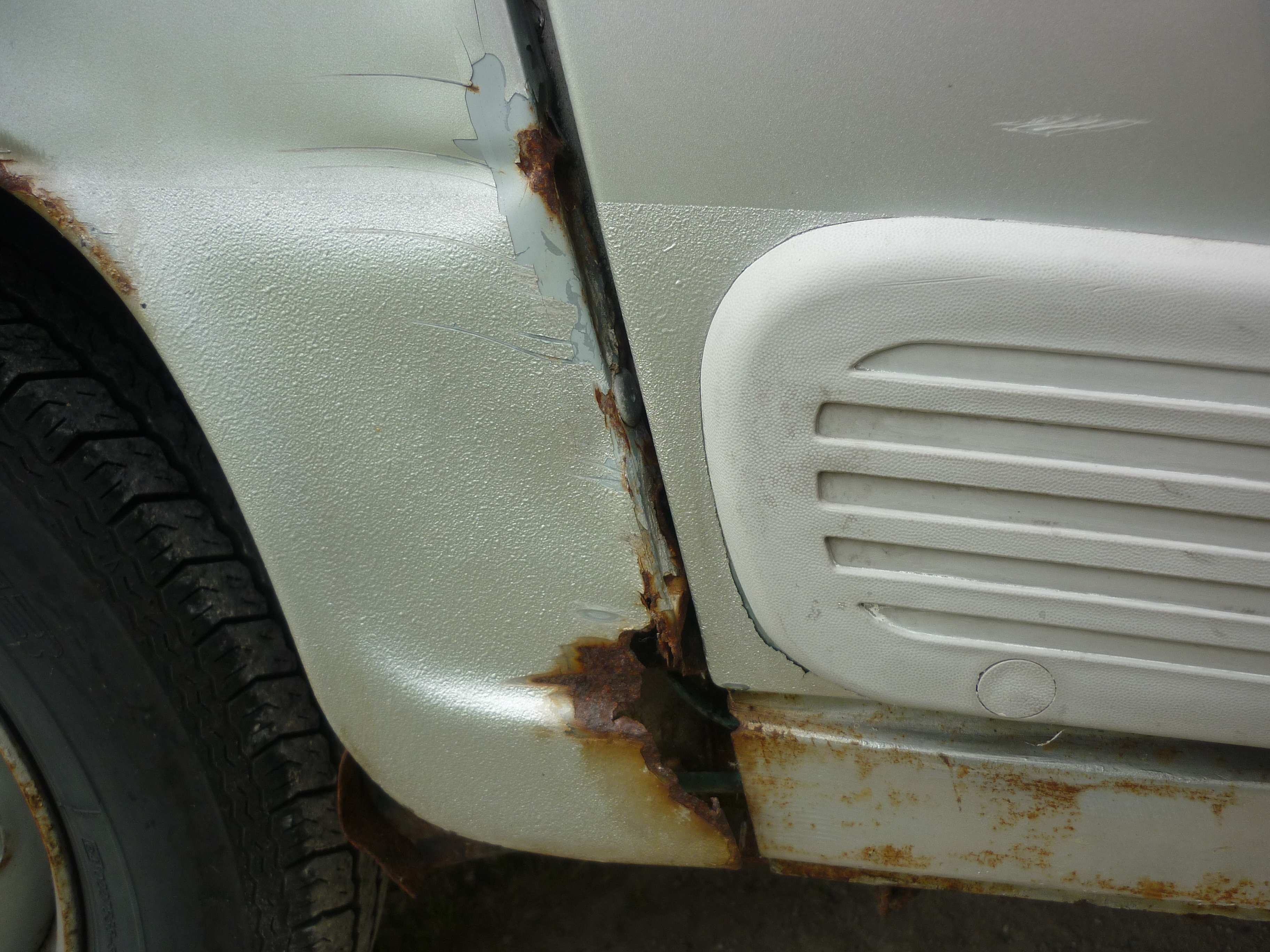 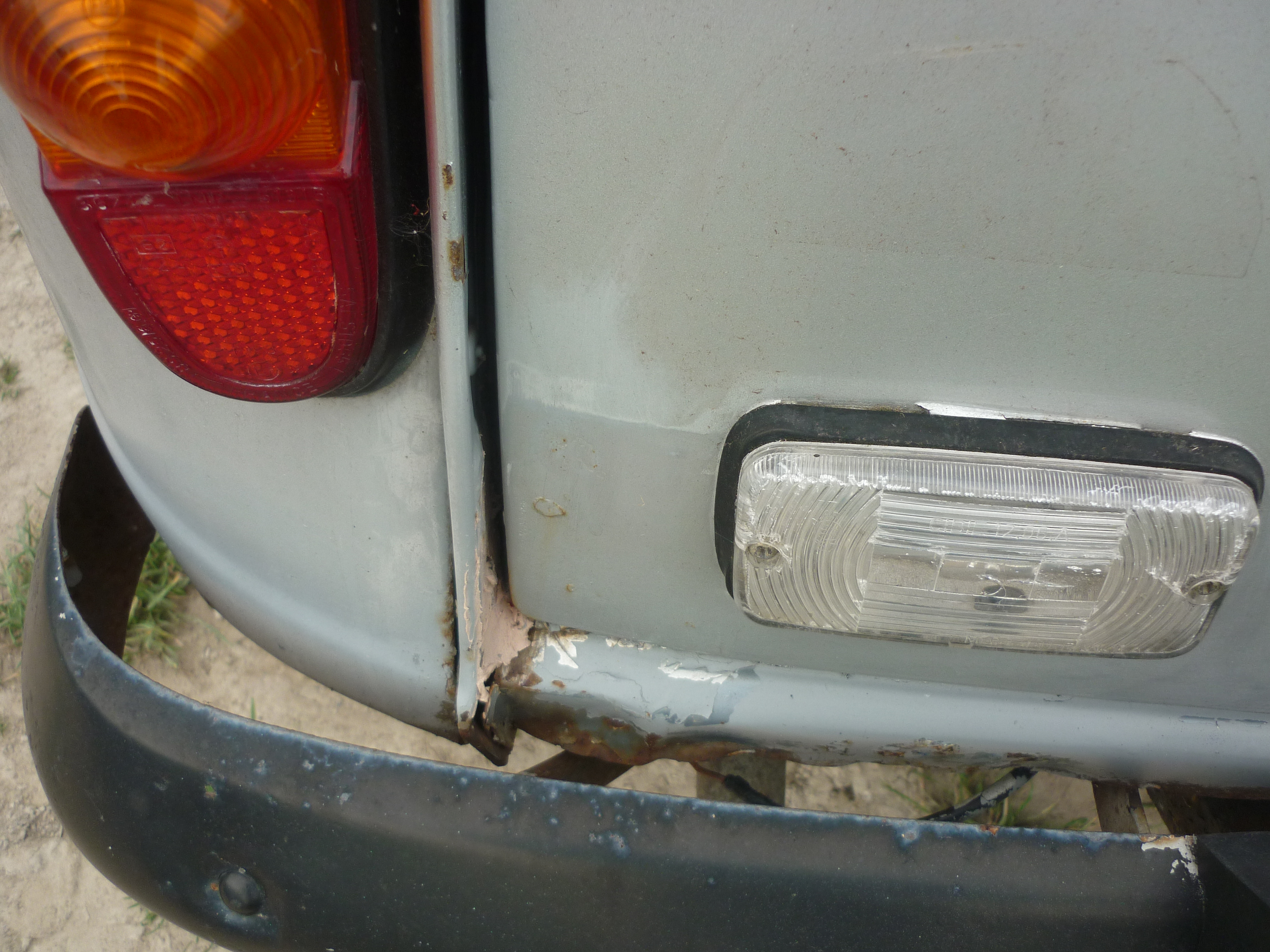 
After that it settled down into reliable daily driver duties for a couple of months, occasionally stopping for the odd scenic photo in the process. 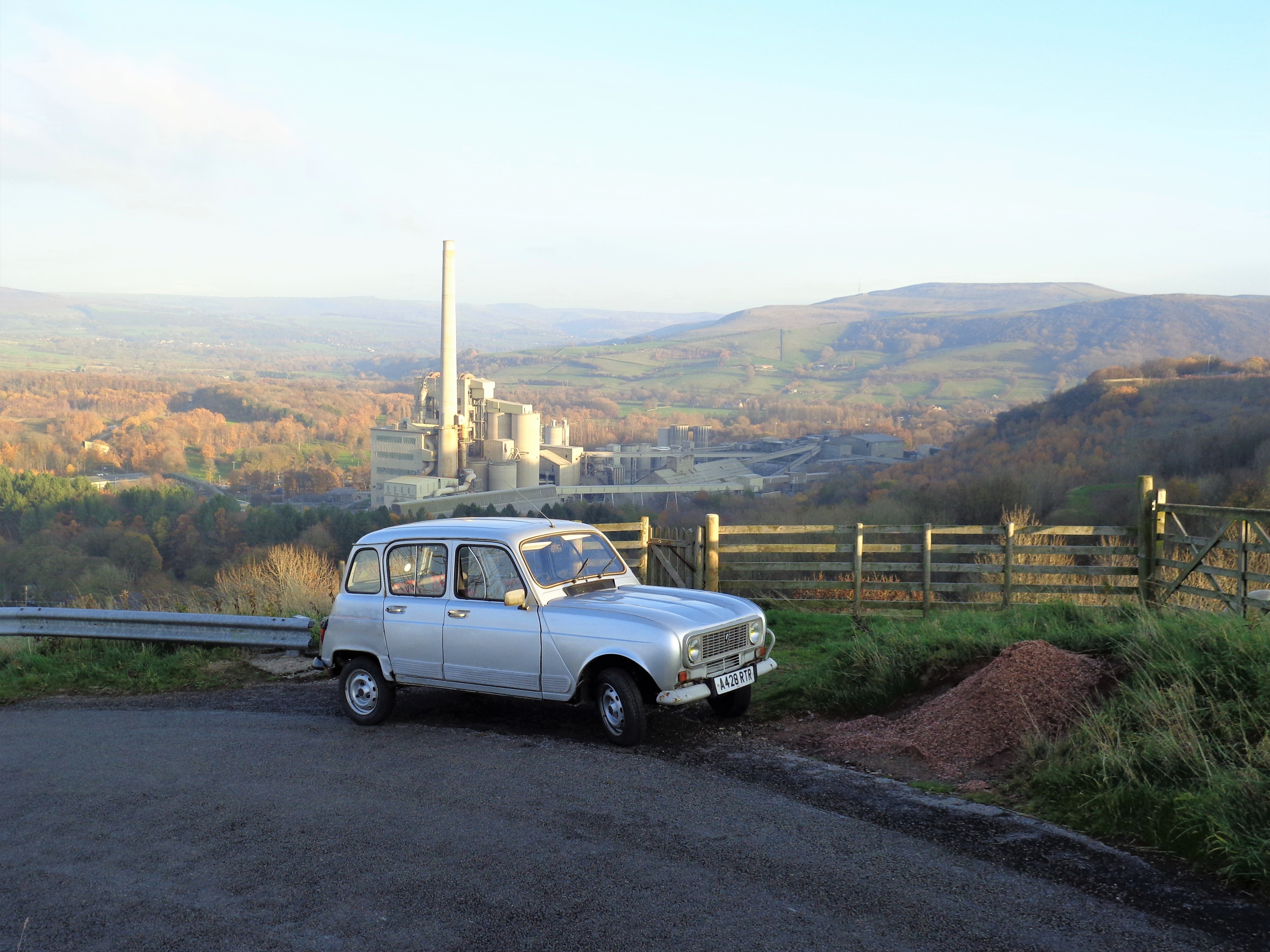 
Then the problems started...
Top

The Clio is very impressive. Super clean and lovely to ride in. That little felted coin holder is just delightful.

But the R4 was the star of the day for me, since it was the first time I've driven it on the highway. Now that was impressive. I was expecting a harsh noisy car wholly unsuited to the motorway, and was pleasantly surprised by its ability to cruise comfortably at the legal limit and quietly enough to allow conversation.
Top

The problem is that once you've experienced the beautiful spring loaded coinholder in a BX no others can compare. 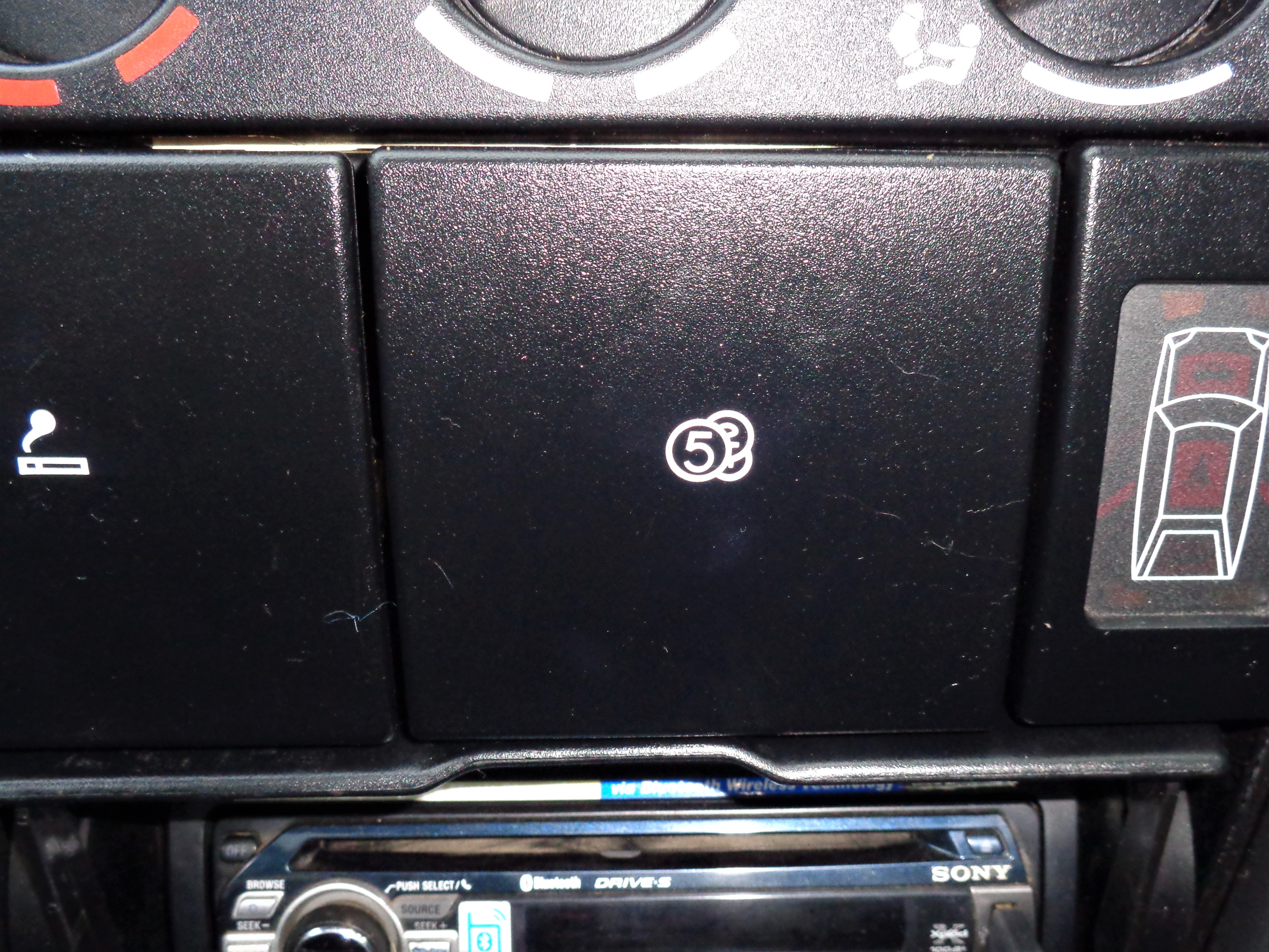 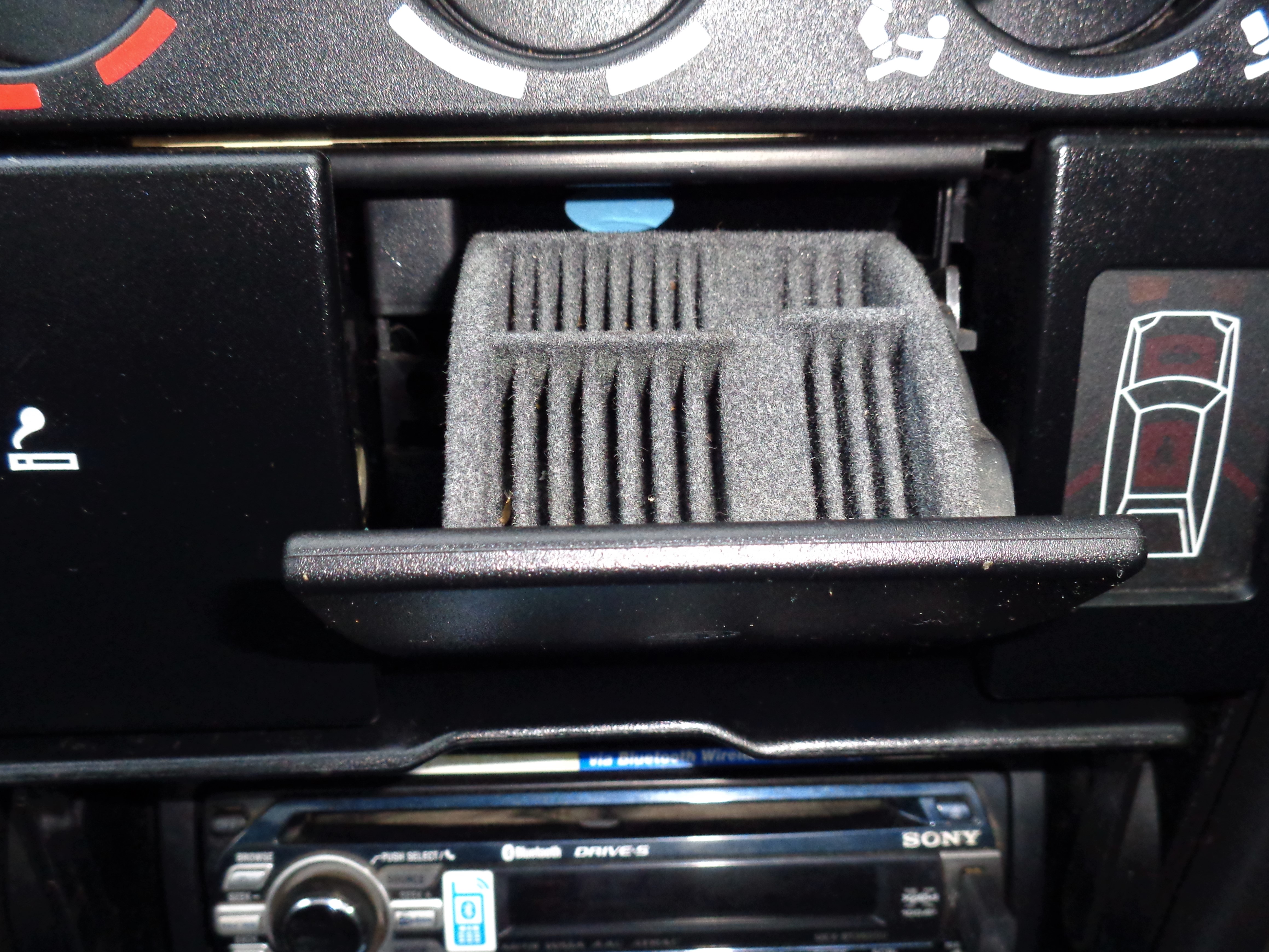 
The R4's motorway performance is one of its most surprising aspects, particularly how stable and planted it feels at those kind of speeds. It shrugs off sidewinds, bow waves from trucks etc with utter contempt. Plus, as you say, it's not really all that noisy either, mainly down to the long gearing (the engine's only spinning at 3,500rpm at 70mph) and the fact that, despite appearances, it's fairly aerodynamic.

I'm beginning to wonder if I really need anything more than a Renault 4 GTL for most of my driving.
Top

C6s present the same problem. One can ALMOST forgive them their myriad problems, in order to have those soft opening door bins.
Top

R4s are great. I used to commute 30 miles each way to Portsmouth along the M27 corridor (and occasionally back to Poole for a late shift) in one. It was an 845cc van, rather than a plush GTL but the additional height never made itself felt in crosswinds either. It was a works van, and although it would have entered the country via Southampton (where I think yours was first registered) I had to pick it up in bloody Falkirk and run it in all the way home. That lasted about as far as Shap and I just gunned it for the ensuing three or four years. Nice fleet you have - enjoyed the updates.
I blame China. Chi-Na.
Top
Post Reply
33 posts